How The Jan. 6 Insurrection Has Changed U.S. Elections 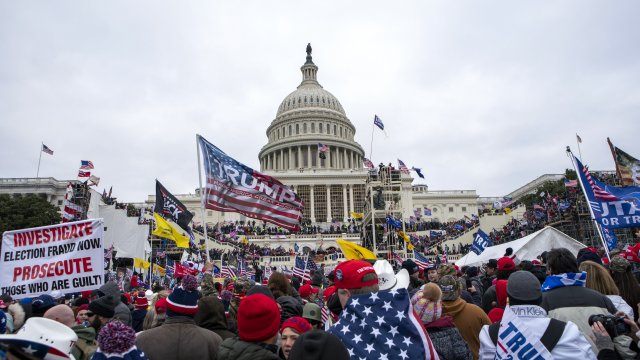 Election deniers are trying to fill administrative roles where they could overturn elections.

It's been a full year since the insurrection at the U.S. Capitol. Supporters of then-President Donald Trump stormed the building to try to stop the count of electoral votes for president.

They didn't succeed, but that failure to stop the vote count has been followed up with a widespread denial of the vote’s results from Trump supporters who falsely claim the election was fraudulent.

Even as the Trump administration’s own Department of Homeland Security found that the 2020 election was the most secure election in history, denying its results has become a core political position for many Republicans trying to win office, and Republicans who have spoken out against that Big Lie of the 2020 election have faced the consequences.

Wyoming Congresswoman Liz Cheney was booted from party leadership in the House last year for calling for Republicans to move on. Election officials from both parties who certified President Biden’s wins in key states have faced efforts to remove them from their job, even death threats.

And former President Trump’s supporters are lining up to replace them. Election deniers are running to fill election administration roles across the country.

The reality in many states now is that some of these people who falsely claimed fraud could now use the powers of election administrators to ensure their side wins.

Politicizing the election process could mean you don’t have to storm the Capitol to steal an election.

Daniel Weiner is the Director of the Elections and Government Program at the Brennan Center for Justice, a non-partisan group advocating for expanded voting access, and he points to a big trend.

"I think it's not an accident that we're having this conversation right now," Weiner said. "The reality is that you had an unprecedented effort to reject the result of a legitimate election, followed by the passage of a slew of laws."

Since the insurrection, the U.S. has seen a new series of laws that go beyond setting rules for voters and instead target the election process.

"To have in the wake of these unprecedented attacks on election officials, state legislatures pass laws that allow partisans to come in and simply fire them... I think it is deeply troubling," Weiner said.

These laws have been introduced exclusively by Republicans, and are being used in conjunction with other efforts that happen to help the GOP politically, including state legislatures taking powers away from Democratic governors and voting limits that often make it harder for Democratic-leaning minority communities to vote.

Let’s run down some specific examples of where this is happening and what these laws might do.

Two more states – Arkansas and Georgia – passed laws that allow for legislators to assume the control of local election boards if they allege rules aren’t being followed. Georgia’s law allows for Republicans in the legislature to remove and replace local election officials, which they have now done, while Arkansas allows them to completely take over running a local election.

And in Arizona and Wisconsin, Republicans have proposed going a step further, allowing state legislators to completely take over the election process.

Arizona’s effort includes a bill that would allow the legislature to reject the results of an election. That Arizona bill was rejected, but they’re not alone.

No state has enacted one of these laws yet, but at least seven states – Arizona, Idaho, Michigan, Missouri, Nevada, Oklahoma, and Texas – have seen bills introduced by Republicans that would allow for partisan officials to reject election results in some form.

"The laws that allow a Legislature to just blatantly set aside a result, whether or not any of them pass, they're indicative of a climate that we've never seen before... to openly say that elected officials can set aside election results if they disagree with them is pretty uncharted territory," Weiner said.

It’s worth noting, we’re also seeing election deniers trying to fill administrative roles where they could overturn elections from within if needed and boot anyone in either party who doesn’t follow the playbook.

In Georgia, former President Trump and his supporters pressured Republican Brad Raffensperger to use his role as the state’s top election administrator to overturn President Biden’s win in the state, as shown in a recording obtained by our partners at The Washington Post.

In the recording, Trump said, "You can’t let it happen, and you are letting it happen... I’m notifying you that you’re letting it happen. So look. All I want to do is this. I just want to find 11,780 votes, which is one more than we have because we won the state, and flipping the state is a great testament to our country."

Raffensperger also faced death threats from President Trump’s supporters, but he certified President Biden’s win. Now he’s facing a primary challenge from an election denier backed by the former president, but he’s still standing up for his actions, as he told Newsy in November.

"Well I've shown I'm one of the few people, if not the only person that will stand in the gap and make sure that we have honest and fair elections in Georgia," said Raffensperger.

In addition to Georgia, the U.S. is seeing pro-Trump candidates for top election administration roles in over a dozen states incorporate denials about the validity of the 2020 election into their campaigns, and some senators say that could threaten the ability of our democracy to function.

"In 2020, democracy prevailed because good people, particularly good election administrators on both sides of the aisle did the right thing, followed the law and ensured that the will of the people prevailed," said Michigan Secretary of State Jocelyn Benson. "If those people are replaced by individuals who are willing to either look the other way or even actively participate in a party's effort or candidates effort to block the results of an election from coming to fruition, then all bets are off in terms of our ability to actually protect the will of the voters and in the future."