How The National Spelling Bee Came To Be 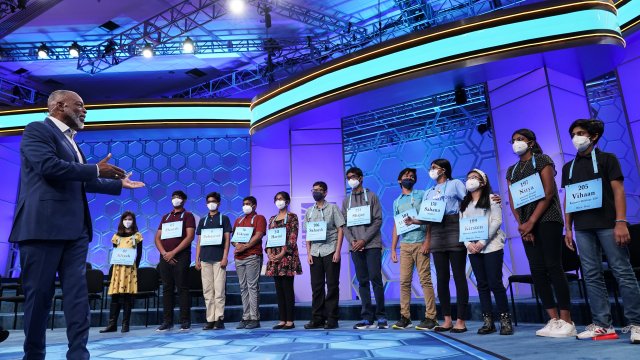 The National Spelling Bee has been around since 1925, but since then, words have gotten tougher, prizes are bigger and the spectacle has spread.

The National Spelling Bee is back and in full swing after last year's part in-person, part virtual competition because of the pandemic.

This is a tradition that goes back almost a century, and a lot has changed in that time.

The Bee has been around since 1925. Back then, nine newspapers got together to sponsor the first event. The first winner was an 11-year-old from Kentucky who spelled the word "gladiolus" correctly. He knew the word because he had raised the flower back home and won $500 worth of gold pieces as an award.

Nowadays, the semifinalists get a $500 gift card. The finalists get a few thousand dollars. The champion gets $50,000, the trophy, more money and a reference library from Merriam-Webster, and more gifts from Encyclopædia Britannica, including a 1768 Replica Set.

There have been a few times when the Bee did not buzz.

In 2019, the Bee had to deal with an eight-way tie because the judges quite literally ran out of words.

Since then, the Bee has added a lightning round. If there are still multiple spellers left standing by the final round, they'll be given 90 seconds to spell out as many words as possible from a prepared list. Whoever spells the most words correctly wins.

After a yearlong hiatus because of the pandemic, the Bee returned last year with another first: Zaila Avant-Garde became the first Black American to be crowned winner of the Bee. She won in round 18 for spelling the word “Murraya” right. In case you were wondering, it’s a genus of tropical Asiatic and Australian trees having pinnate leaves and flowers with imbricated petals.

So, it’s a plant, but Zaila was picturing something different when she won.

“Bill Murray’s face," Avant-Garde said. "I just got 'Murraya' and I just thought of his face, and it was so funny to me."

Millions of kids fight for the chance to make it to the Scripps National Spelling Bee. This year it began with 234. By the end of day one, 88 spellers remained.

The first few rounds consist of oral competition and one round of multiple-choice word meaning. As it turns out, it’s not just spelling.

An incorrect answer in any of those rounds will get you an automatic elimination — and a ding.

The Bee has become more than just a competition. Today, it is live-streamed and tweeted about, which is very different from when it first started. Now, it's a national spectacle.