How The Obama Selfie at Mandela's Service Became 'News' 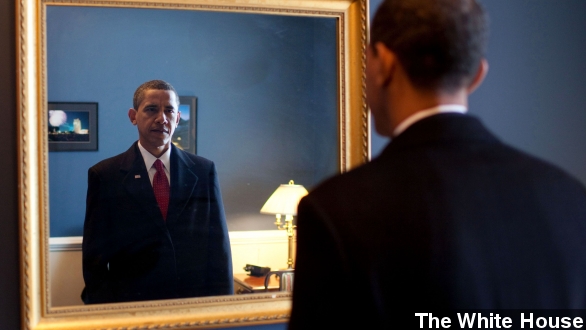 The selfie certainly went viral, but is it newsworthy?

A certain selfie seemed to mesmerize media for a while Tuesday.

"It's a picture that appears to show President Obama and the British and Danish prime ministers taking a selfie. Now, they're getting a bit of flak for doing this at such a somber service." (Via MSNBC)

Everyone wants to know the secret formula for getting content to go viral. Here it is: take your headline, insert the words "Obama," "selfie" and — since his memorial service was held today — also include "Nelson Mandela."

And the story went viral, to be sure. But is it newsworthy? A Washington Post article flanked the selfie with a series of photos showing First Lady Michelle Obama's possible disapproval. But it also provided context of the president's previous meetings with the Danish prime minister.

CBS capitalized on the keyword magic, too. Its dose of context — noting President Obama's recent quip about his daughters spending a lot of time on their iPhones — and the fact they took a selfie at Dad's 2013 inaugural parade.

Then, there's The Telegraph — firmly focused on the first lady's reaction.

Never mind the discussion of whether this is appropriate behavior at a memorial service. We live in an age where there's a Tumblr dedicated to funeral selfies called — wait for it — "Selfies At Funerals."

The selfie at Mandela's service served as the swan song for this particular Tumblr — whose creator wrote, "I’d intended for the post below to be the final one here, but then this just happened at Nelson Mandela’s memorial service. ... Thank you, world, and good night!"

And don't forget, the Oxford Dictionary recently declared "selfie" its word of the year for 2013. Oxford's definition of news, by the way — "newly received or noteworthy information, especially about recent or important events." (Via The Guardian)