How The Pandemic Changed The Book Industry 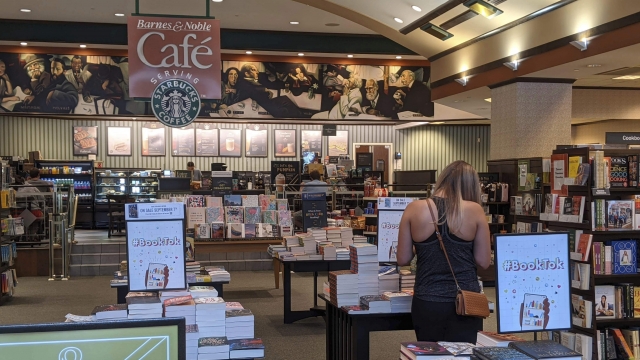 During the pandemic a hashtag on TikTok known as BookTok started trending, prompting book recommendations, reviews and discussions.

TikTok has something for everyone. It's easy to get lost in the app or go down a random rabbit hole learning something you didn't think you needed to know.

One such rabbit hole has become affectionately known as "BookTok" — a genre of TikToks with book recommendations, reviews and discussions. And the impact it has on the book industry is huge.

According to the NPD Group, last year, readers bought over 825 million print books in the U.S. That's more than any year since records began in 2004. Many of these books gained popularity on BookTok with hashtags like "BookTok" and "BookTok made me buy it" that have billions of views.

While normally, print and digital are competing against each other, now digital trends are actually lending print a hand. We started to see this trend take off during the beginning of the pandemic when stay-at- home orders were put in place and TikTok was growing in popularity in the U.S.

BookTok spans a wide range of literary genres, but the most popular books on the app typically appeal to young women — often thrillers and romance novels.

Kendra Keeter-Gray is a romance novel enthusiast, and she's pretty big in the BookTok community. She's been making BookToks since March of last year, and she explains why she thinks these types of books have become so popular.

"It's nice to read books that are guaranteed to have a happy ending, especially with the current state of the world for the past few years. I want to go into something knowing that everything is going to end OK," Keeter-Gray said.

And authors are getting a boost right along with their genres. When a book or author gets a lot of attention from the app, their books get bumped to the top of the New York Times bestseller list. Take Colleen Hoover, for example; she's been around for a minute, but BookTok was a game changer for her.

Currently, three of her books are top five on the combined print and e-book fiction bestsellers list, and they've been on the list for six months to over a year. And these books aren't new; BookTok is driving up new sales and bringing older books back to the forefront.

Videos with tags like Colleen Hoover, Colleen Hoover books, and one referring to her fan-given nickname Coho have nearly 2 billion views combined.

Colleen's success was no fluke. Other authors have seen great success like Taylor Jenkins Reid who wrote "The Seven Husbands of Evelyn Hugo" and Alex Michaelides who wrote "The Silent Patient."

And bookstores are living in this moment, too. Recently, TikTok announced that it's partnering with Barnes and Noble to connect new book releases with the BookTok community. Kendra is a part of this collaboration along with a few other people including BookToker Ayman Chaudhary.

"Seeing the impact that BookTok has had on books — you make one video and it goes viral and the book is sold out. Whether it be on Amazon, Marginals, Books-A-Million, all these different bookstores, it's crazy to me how that could happen. And I think that just goes to show that it's a community that needs to be taken seriously," Chaudhary said.

More independent bookstores have also popped up across the country. And while storefronts may be filled with all those bright colors and obscure shapes on the covers, you know what I'm talking about — at the beginning of the pandemic, owners were worried about the future of their businesses.

According to the American Booksellers Association, more than 300 bookstores have opened in the last couple of years, and bookstore owners are becoming more diverse.

The book industry as a whole is still overwhelmingly White. Take authors as an example: a New York Times analysis that looked at books released by major publishers between 1950 and 2018 found that 95% of authors in their sample were White. The hashtag "publishing paid me" on Twitter also highlighted pay discrepancies, showing that some White authors had been paid hundreds of thousands of dollars more than some writers of color.

BookTok has had a big impact, but creators say their own community has room for improvement along with the industry.

"Follow diverse creators," Chaudhary said. "They're out there, I'm telling you, create diverse content. I'm telling you, the books that are trending, that are White-centered and this and that, it's to me, my opinion is, they'll always be trending or people will always love them, but how long will people love these diverse stories?" Chaudhary said.

"I think BookTok is still relatively a very White space, but I think it's changing. But it could still be better. And I think it's because publishers are starting to see people like myself and other creators of color. I think they're starting to realize that there is more of a need to have books that feature characters that look like us," Keeter-Gray said.

Experts say having characters readers can relate to is a big factor in how certain demographics enjoy reading.