How The Power Of Music Is Helping Patients With Alzheimer’s 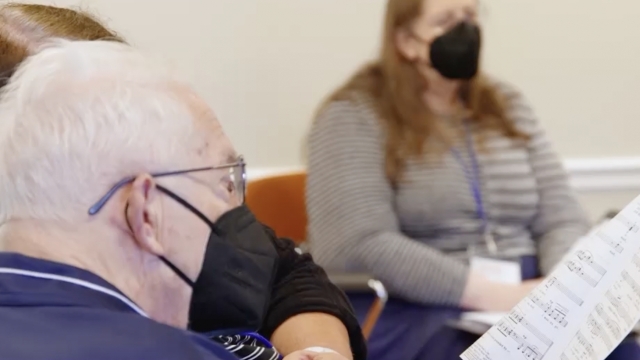 An adult care center for people with dementia uses music as therapy for families, patients, and caregivers.

It’s been said that music is healing, and for Peter Midgely and his daughter Debbie Caramella, music is family.

"He made us all play instruments — all six kids," said Caramella.

The father and daughter make their way to practice with the Sentimental Journey Singers weekly, a chorus of people with memory loss and their loved ones.

A second sister joined us via zoom.

DEBBIE CARAMELLA: Dad wasn’t your first job delivering papers? And what did you do with your money?" Didn’t you pay for your own..

For the trio, rehearsals are about more than family time.

Study Finds Most Americans Unfamiliar With Signs Of Early Alzheimer's

The report also talked about the cost of waiting too long for a diagnosis, projecting it will nationally cost $321 billion to care for people.

Mary Ann East, is the director of Arts for Life, Encore Creativity for Older Adults.

"There's even parts of the brain that are strictly for music and they tend to be untouched by cognitive change, or at least not touched right away," said East.

It’s something that’s been observed with musician Tony Bennett, who has Alzheimer’s disease.

The group of singers rehearse at Insight Memory Care, an adult center in Virginia dedicated to memory loss patients.

"When you get a diagnosis, families go, what the heck do I do now? We're trying to meet them at that space," said Anita Irvin, the executive director at Insight Memory Care Center.

For people with dementia, it isn’t just about music, but finding that thing that makes each person spark.

"This is actually participant artwork here. So this is stuff that is done by our participants that we like to kind of highlight what they've been successful at doing through art," said Irvin.

"I find that physical movement, you would say they're minor, but for seniors, they're major," said James Brophy, a client at Insight Memory Care Center.

As with any diagnosis, the impact goes beyond the patient, to family members and caregivers.

Melissa Long, is the director of education and support at Insight Memory Care Center.

"The guilt that they're not doing enough. The frustration that they get that this isn't the person they've been with their whole life," said Long.

A report from the Alzheimer's Association found a 16% jump in dementia and Alzheimer's related deaths nationwide.

"One of the most devastating times that can happen to a caregiver is the day that that person doesn't know who they are," said Beth Kallmyer, the VP of care and support at the Alzheimer’s Association.

According to the Alzheimer’s Association caregivers of patients with dementia are more likely to suffer from higher levels of stress and anxiety than non-caregivers.

"It's helpful to remember that it's a disease. The person has no control over it, but still it's very devastating to family members," said Kallmyer.

While there’s no cure for diseases like Alzheimer’s, experts encourage caregivers to focus on the little victories. And while there’s no clear-cut evidence that isolation speeds disease progression.

"There is there's some evidence showing that social engagement, using your brain to do different things, having a purpose is remains really important," said Kallmyer.

CARAMELLA: It’s beneficial to have physical activity, mental activity and social activity every day. What do you think dad? Does this cover those things?

CARAMELLA: It does. All of it.