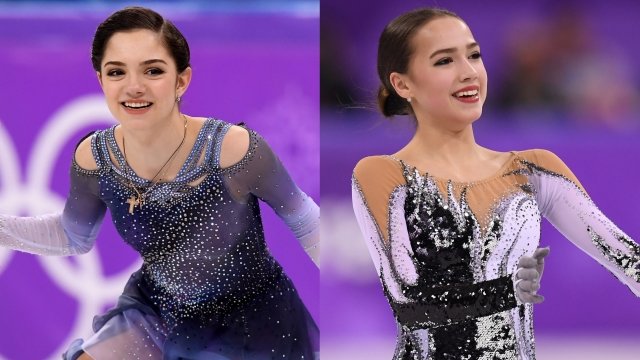 Just minutes after Evgenia Medvedeva set a world record in the women's short program, her teammate bested her, setting up an intense final event.

It's hard to say which is more impressive: setting a world record or watching a skater's teammate steal their thunder minutes later.

Olympic Athletes from Russia figure skater Evgenia Medvedeva is one of the best figure skaters in the world. She showed everyone why by setting a world record with 81.61 points. Keep in mind, the 18-year-old had a broken bone in her foot just last fall.

How Do Olympians Keep Nailing Bigger And Seemingly Impossible Tricks?

Fans want to see athletes hit big tricks as much as athletes want to do them — but for that to happen, it requires a bit of help from engineers.

Here's what else made Wednesday's routines from Medvedeva and Zagitova so impressive: According to international skating rules, women's short program competitors must complete four jumps in their program. As The New York Times points out, both OAR skaters completed their jumps in the second half of their routines, when skaters are the most winded.

Medvedeva and Zagitova will compete against Canada's Kaetlyn Osmond, who placed third, and a field of 21 other competitors Friday in the women's free skate.