How The U.S. Could Destroy Syria's Chemical Weapons At Sea 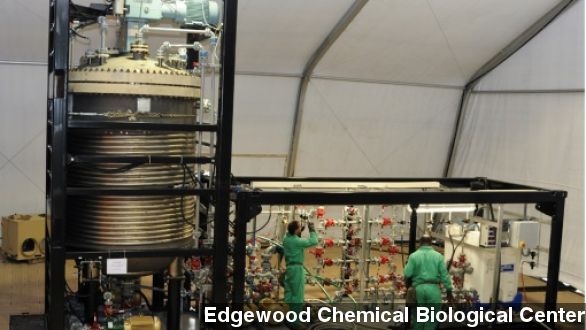 The group tasked with destroying Syria's chemical weapons has partnered with the U.S. to create a floating chemical-weapon destruction site.

The group tasked with destroying Syria's chemical weapon stockpiles has devised an ambitious but risky plan.

The Organisation for the Prohibition of Chemical Weapons has already made progress disarming the country's chemical weapons. Now it has to deal with the toxic precursor chemicals that make up sarin and mustard gas. (Via Euronews)

The OPCW has just under one month to ship an estimated 500 tons of those chemical weapon components out of Syria. The chemicals must then be destroyed by the end of March 2014. (Via Fox News)

And since none of Syria's neighbors have agreed to host the destruction process, the OPCW has partnered with the U.S. to try something unprecedented: destroying chemical weapons over international waters.

But the chemical precursors must pass through several high-risk battle zones on the way to Latakia, and the convoys will make an attractive target for militant groups. (Via Al Jazeera)

One nonproliferation expert told National Journal: "It doesn't take a stretch of the imagination to recognize that if you capture a convoy that has mustard gas in it, then you've got a real war prize. ... And if it's a terrorist group, they might use it against the neighboring states.​"

If the deadly payloads make it out of the country in one piece, this ship will be their next destination. The U.S. is sending the MV Cape Ray, a military cargo ship, to receive the chemicals. (Via The Virginian-Pilot)

The Cape Ray is currently being fitted with two Field Deployable Hydrolysis Systems, relatively portable devices that neutralize chemical agents by diluting them with water and other agents. This will be the first field test of the system. (Via Edgewood Chemical Biological Center)

U.S. officials say they should be able to break down all of the dangerous chemical components in 45-60 days. But the neutralization process still leaves the Cape Ray with a large problem: toxic waste.

"That is going to produce about 7 million liters of toxic effluent, which will need to be got rid of somewhere. You can't just chuck it in the sea; it's going to have to be taken to a commercial facility somewhere." (Via BBC)

That "somewhere" is probably going to be a commercial facility in the U.S.

According to The Guardian, the effluent will be stored in about 180 storage containers and transported back to the U.S. for disposal. Officials say none of these chemicals should end up in the environment.

The OPCW has even more work cut out for it further on down the road. An additional 800 tons of less-dangerous chemical components must be out of Syria by Feb. 5.