How To Not Burn Down Your House This Holiday Season 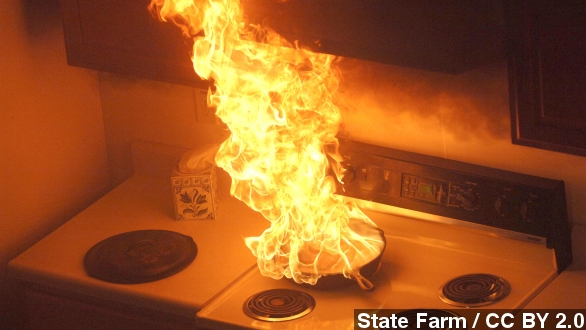 Holiday staples such as fried turkeys, Christmas trees and candles can all pose fire hazards. Here's how to stay safe this season.

Dreaming of a fiery Christmas like this scene from "The Santa Clause"?

We didn't think so. And according to the U.S. Fire Administration, more cooking fires occur on Thanksgiving, Christmas Eve and Christmas Day than any other days of the year. (Video via The Tennessean)

In 2011, the U.S. lost $11.7 billion to fires, so if you've already broken the bank with your holiday shopping, it's probably not a bad idea to take extra precautions. (Video via U.S. Fire Administration, ABC)

For one, always stay in the kitchen if you are frying, grilling or broiling food. It's recommended you turn the stove off even if leaving for a short time. It's not a bad idea to set a timer to remind you that you have something cooking if you are leaving it to bake or boil. (Video via National Fire Protection Association)

And even though it may sound appealing, the Fire Administration warns turkey fryers are pretty dangerous. It's possible to tip them over, and any amount of spilled cooking oil could possibly start a fire.

If a grease fire does break out, WFTS shows how throwing water on the fire will actually make it worse. If a fire extinguisher is not readily available, you should try to suffocate the fire using a lid or a cookie sheet.

It's not just cooking that poses a fire hazard over the holidays, either. Christmas trees have proven dangerous too.

It's important to remember to avoid any heat source such as fireplaces or radiators when putting up a tree. The tree also needs to be watered regularly because a dried-out tree can go up in flames more quickly. (Video via State Farm)

And be sure to check that the string of lights around the tree has no broken cords or loose bulb connections. It's best to avoid putting candles near the tree or drapes as well. (Video via NBC)

And your most important holiday preparation tip? Make sure you have sufficient homeowners or renters insurance. You know, just in case.

"Hi. Um, we were trying to fry a turkey and ... the fryer has caught on fire," a woman says in this YouTube video.

"That is exactly why you want a high-quality fire extinguisher right in the kitchen."