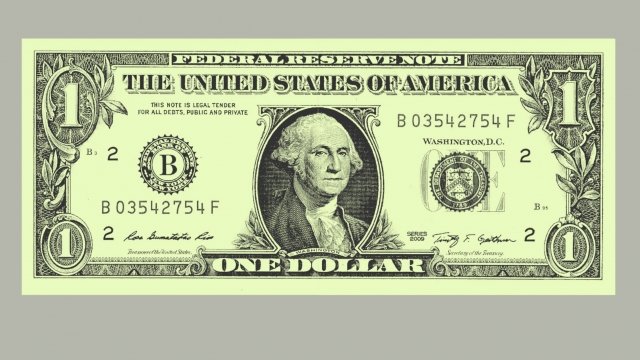 The federal budget is usually talked about in millions, billions or trillions. We broke it down to a more relatable scale.

The U.S. federal budget is about $4.2 trillion a year. And more than 80 percent of that budget comes from our paychecks in the form of payroll and income taxes.

And the government is pretty good about telling us where it's spending our hard-earned money, but it's usually talked about in denominations of millions, billions and trillions.

I don't know about you, but those are not numbers I can even sort of relate to, especially trying to put government spending into context.

Instead of using the president's donations to balance budgets, departments that receive them are putting them to use on smaller projects.

But what if we broke it down by using good ol' George Washington? Think of him as a representation of every dollar you pay in income taxes.

Now let's break this dollar into 13 categories, from health care to scientific research. We're not going to get into every single one of these categories, but here are some deets on just a few.

In 2016, 29.1 cents of every one of your friendly G.W.s went to something health care-related. That includes funding programs like Medicaid and the Children's Health Insurance Program that help subsidize health services for people.

The next-highest cost for all of us was 23.4 cents to the Pentagon and military. The United States spends the most on its military in the world, so this shouldn't be a surprise. Those 23 cents helped pay for military operations in Afghanistan and the acquisition of weapons.

For a country that pushes the importance of education, we didn't pay much for it. Just 2.8 cents of every tax dollar was spent on Pell Grants for college or grants for public schools.

Another intraparty fight is slowing down the tax reform bill.

In 2016, 1.3 cents of your little dollar went to some type of international affairs or humanitarian cause, whether that be the actual Department of State, the Peace Corps or the Global Fund to Fight AIDS, Tuberculosis and Malaria.

You can tell a lot about a country by how it spends tax dollars. What are its priorities? How involved does it think government should be in everyday life? And since we're a democracy, that's something that molds and changes over time, especially with new administrations.