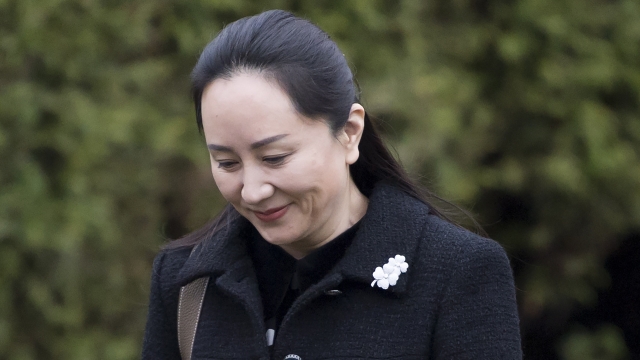 To extradite Meng Wanzhou, a judge has to rule that the crimes the U.S. has accused her of are also crimes in Canada.

Huawei's chief financial officer appeared in Canadian court on Monday. A judge there will determine whether Meng Wanzhou should be extradited to the U.S to stand trial.

Canadian authorities arrested Meng in December 2018 at the request of the U.S., which has charged her with bank fraud and sanctions violations. She's been under house arrest in Vancouver while waiting for the trial to start.

Shortly after her arrest, two Canadians were arrested in China on suspicion of espionage — something that's been widely viewed as retaliation for Meng's detention. They've been held in China for more than a year.

Meng will only be extradited if a Canadian federal judge finds that a "double criminality" standard has been met. That means that the crimes she's charged with in the U.S. also have to be considered crimes in Canada. To be clear, this trial is not meant to determine whether Meng actually broke U.S. law. It will only settle whether the U.S.' allegations meet the standards needed to extradite her.

Day one of the trial focused on Meng's arguments against her extradition. Canada's attorney general has argued that the double criminality standard is met because bank fraud is a crime in both the U.S. and Canada. But her defense team says the standard is not met because a key part of this case is related to the alleged violation of U.S. sanctions against Iran. They argue that even if Meng had violated those sanctions — which she denies doing so — she would not have broken any Canadian laws because Canada has not sanctioned Iran.

Meng's arrest has not helped ease trade tensions between the U.S. and China. The two countries signed a phase one trade agreement last week, but it notably didn't mention Huawei. The U.S. believes Huawei poses a national security threat and has warned other countries to stay away from it, especially when it comes to 5G.