Huckabee Looks For Room In A Crowded GOP Field 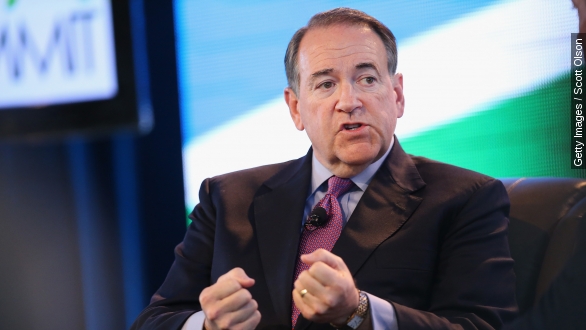 "I am a candidate for President of the United States of America," Mike Huckabee told a crowd of supporters in Hope, Arkansas. (Video via Politico)

Mike Huckabee is officially making a second run for the White House, though he's been acting and sounding like a candidate for months now.

"It's not that I love guns. I love freedom. I love America," he said at an NRA conference.

In January, the former Arkansas governor left the Fox News program he had hosted for six years.

And last week he released a flashy pre-campaign video contrasting Huckabee with the Clintons.

The title of his new book alone tells you a lot about Huckabee's populist worldview and politics.

And he's a strong believer in states' rights.

"There is no federal role in education," Huckabee said.

Huckabee was a top contender in 2008's Republican primary, winning eight states on the back of rural and evangelical support. But this time, the field is even more crowded.

And there are other candidates making a push for Huckabee's supporters.

But Huckabee still has great name recognition among conservatives, and he's one of the few candidates sticking by views still championed by social conservatives.

"This is not just a political issue. It is a biblical issue," Huckabee said on CNN.

As he has for the past few days, Huckabee will spend the next weeks and months visiting early primary states and reaching out to political donors.