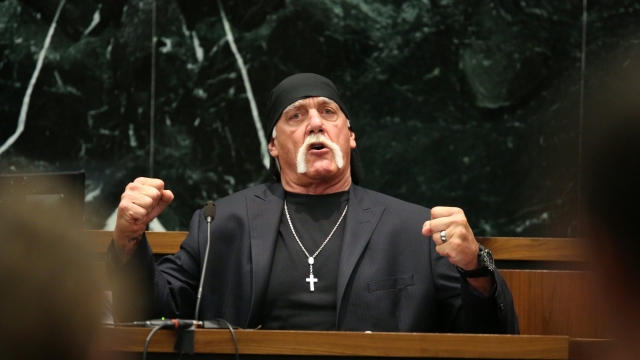 The new suit claims Gawker is responsible for leaking the transcript of a racially insensitive rant that caused the WWE to cut ties with Hogan.

Hulk Hogan hit Gawker with another lawsuit Monday, and from the looks of it, Gawker kind of saw this coming.

In March, Hogan was awarded $140 million after suing Gawker Media for posting a clip of a sex tape he was in that was recorded without his consent.

The new suit claims Gawker is responsible for leaking the transcript of a racially insensitive rant that caused the WWE to cut ties with Hogan last year.

Gawker denies leaking the transcript and claims Hogan's previous suit was really just an attempt to keep even more racially insensitive material from coming out.

After Hogan's court victory, Gawker's founder wrote: "I had suspicions, but it is now clear that Hogan’s lawsuit was a calculated attempt to prevent Gawker, or anyone else who might obtain evidence of his racism, from publishing a truth more interesting and more damaging than a revelation about his sex life."

But Hogan insists with his original lawsuit he was just trying to protect himself and others from media overreach.

"I made people aware that this shouldn't happen to normal people, especially any kids that are on social media. ... Gawker is the ultimate bully," Hogan said on "The View."

In a statement given to media outlets, Gawker said, "It’s time for Hulk Hogan to take responsibility for his own words, because the only person who got Hulk Hogan fired from the WWE is Hulk Hogan."

This video includes images from Getty Images and clips from WFTS and WWE.