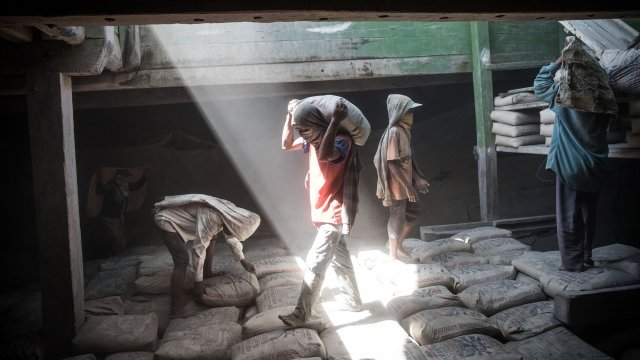 More than 40 million people are affected by modern slavery and the issue touches every region on the planet.

Modern slavery still affects more than 40 million people all over the world.

It's most common in Africa, but it's an issue that touches every region on the planet — including the U.S. — and, in practice, can be more subtle than images we might associate with plantation-era slavery.

Before The Boat: Life In An African Slave Castle

The horror stories from inside this Ghanaian slave castle easily rival the cruelty of the Middle Passage and life on an American plantation.

There's no legal definition for modern slavery, but it's described as a form of exploitation where a person can't leave for a number of reasons, including threats of violence. The International Labor Organization, which is part of the United Nations, breaks down modern slavery into two main categories: forced marriage and forced labor, like sex trafficking.

A 2017 CNN report about people in Libya being auctioned off as slaves is an example of forced labor.

"It's hard to believe that these are the lucky ones, rescued from warehouses like the one in which we witnessed — the auction," CNN reporter Nima Elbagir said.

More than 700,000 migrants from mostly northern African countries have gone to Libya for better economic opportunities or transit to Europe. Because of conditions within the country, many of those migrants have been subjected to exploitation.

Reported instances of slave trading in Libya prompted responses from the U,N., the International Organization for Migration and the African Union, which aims to "promote and protect human and peoples' rights."

Forced labor, which includes sexual exploitation, affects mostly women and girls — 71 percent of all modern slavery victims. And it's a problem in the U.S. According to Rights4Girls, 1,000 children in the U.S. are arrested for prostitution each year, and they are among our most vulnerable.

"We worked with one survivor in particular that explained she felt in many ways foster care was the perfect training for a transition into a life of trafficking," Rights4Girls Executive Director Yasmin Vafa said. "She said this because it was in foster care, throughout her 14 different placements, that she first internalized the notion of being cared for and being raped, and it was also during her time in foster care that she internalized being tied to money."

The majority of women in forced labor do domestic work — 61 percent — much like the kind of work done by a Filipino woman named "Lola," who's described in an essay by the late Alex Tizon.

"Her days began before everyone else woke and ended after we went to bed. She prepared three meals a day, cleaned the house, waited on my parents, and took care of my four siblings and me. My parents never paid her, and they scolded her constantly. She wasn't kept in leg irons, but she might as well have been," the narrator read.

So what's being done to combat modern slavery? Earlier in 2017, the U.S. State Department awarded $25 million to the Global Fund to End Modern Slavery.

And the U.N. has called for Libyan authorities to investigate the reports of migrants being sold as slaves.

"I urge every nation to adopt and apply the U.N. Convention against Transnational Organized Crime and its protocol on trafficking in persons, and I urge the international community to unite in fighting this scourge," U.N. Secretary-General António Guterres said.