Human Rights Violations On The Rise In Democratic Republic Of Congo 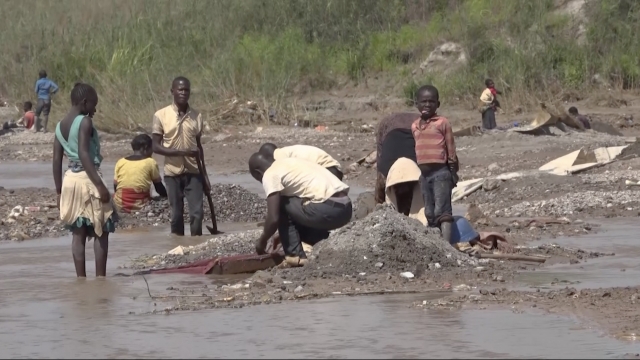 More than 70% of the world's cobalt is produced in the DRC. A mining law prohibiting children from engaging in artisanal mining is not being enforced.

A desperate search for survival – women and children as young as nine years old spend hours each day digging at a cobalt mine in Kolwezi City in the southeast of the Democratic Republic of Congo. They're paid as little as a dollar per day.

Cobalt is used for making rechargeable lithium-ion batteries for smartphones and laptops. It's also a key component used for powering electric vehicles.

"The demand for cobalt is growing actually ... because of the demand for electric vehicles and the fact that the world is shifting from an economy that is based on fossil fuels, you know – everything related to oil and coal – to green energy," DRC mining consultant Arthur Katalayi said.

More than 70% of the world's cobalt is produced in the DRC.

The DRC's mining law prohibits children from engaging in artisanal mining. But it's clear that the government is not adequately enforcing the law.

International organizations are now working with the government to try to streamline the mining industry. Some activists are calling on world leaders to demand changes as they pivot to electric cars.

One potential solution is technology to better monitor the cobalt supply chain. It could be a key to ending human rights abuses.

"Block chain technology is already used in the diamond industry and its is true that cobalt is not quite the same, but the technology is there today to be able to track cobalt from the mine all the way to the end product, whatever that end product might be," Katalayi said.

In 2019, a U.S.-based NGO filed a lawsuit against Apple, Google, Dell, Tesla and Microsoft alleging that the corporations profited from child labor in their cobalt supply chains in the DRC. But the tech companies argued that they did not knowingly benefit from cobalt mined by children. The class action case, which  demands reparations, is still pending in American courts.

The extraction of cobalt has come at a high cost to many poor Congolese citizens in the DRC's mining sites in the southeastern city of Kolwezi. Cases of child labour, exploitation and fatal accidents are common. Some analysts say the industry has been poorly regulated by the Congolese government which has been grappling with epidemics, conflicts and political instability for over two decades.