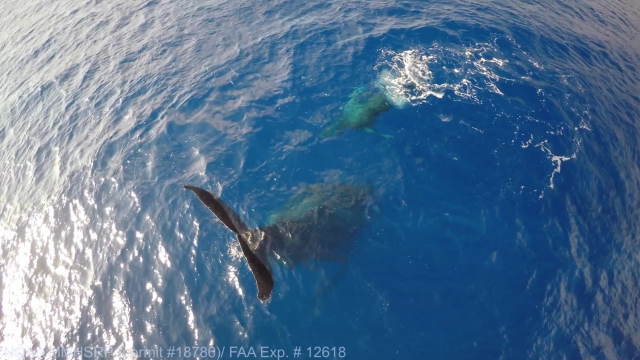 This unusual behavior for a humpback whale is a rare event to catch on film, according to the National Oceanic and Atmospheric Administration.

A whale was captured on video back in February with just her tail hanging out of the ocean, while her calf swam around her.

The humpback whale, which scientists spotted off the coast of the Hawaiian Island of Maui, was exhibiting some pretty rare behavior for the species.

NOAA reports "tail-sailing is fairly common among southern right whales but has rarely been observed or documented among humpbacks."

It's even more uncommon to capture it on film. Researchers are trying to figure out exactly why whales do this because they obviously aren't using their tails to sail around the ocean.

A resource protection specialist told The Huffington Post the whales could be cooling off, feeding their calves or getting some rest.

"A lot of times, they pick a protected area, shallow with good visibility, so they can sit there, so to speak, and watch over junior while conserving energy," researcher Ed Lyman said.

Whatever the reason, the whale captured on film reportedly was tail-sailing for at least 10 minutes.

This video includes clips from NOAA and images from Andrei Taranchenko / CC BY 2.0.