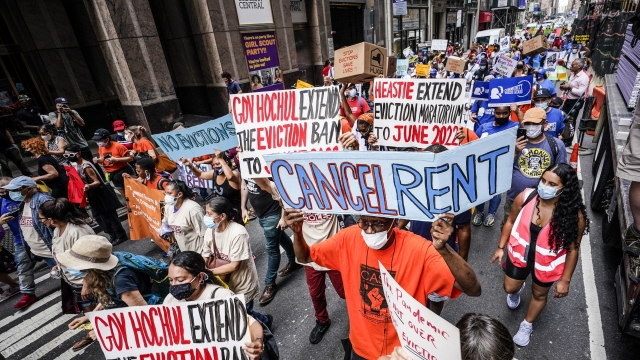 Protesters burned eviction notices to march for the lifted moratorium.

Protesters were burning eviction notices in front of a Brooklyn housing court as they shouted for no evictions.

"We choose to allow this thing to happen where we throw people out into the streets," Brooklyn activist and tenant organizer Michael Hollingsworth said.

At least 291,000 families have pending cases at the housing court.

Rebecca Garrard with Citizen Action of New York says mass evictions could cause a homelessness crisis.

"We can expect to see court cases moving through New York at a rapid rate," Garrard said. "Tenants who previously had been protected against payment evictions because of financial impact from COVID will be displaced from their homes and facing homelessness and the need to share living situations in a moment when the pandemic numbers are increasing."

New York's eviction moratorium started in March 2020 with several extensions put in place, but Gov. Kathy Hochul has declined to continue the program.

Tenants and advocates are asking for an extension until June.

Meanwhile around the nation, some parents are without child tax payments for the first time in months. The child tax credit, part of the Biden administration's American Rescue Plan, expired in late December.

Jason Carter lives in Ohio with his wife and daughter, and lost his job during the pandemic.

“So now in the job I have, it takes two, two and half paychecks to make up for one paycheck I was previously making," Carter said.

The monthly child tax credit payments helped offset some of their costs, including child care.

The payments could be reinstated if Congress passes Build Back Better and includes the child tax credit in it.