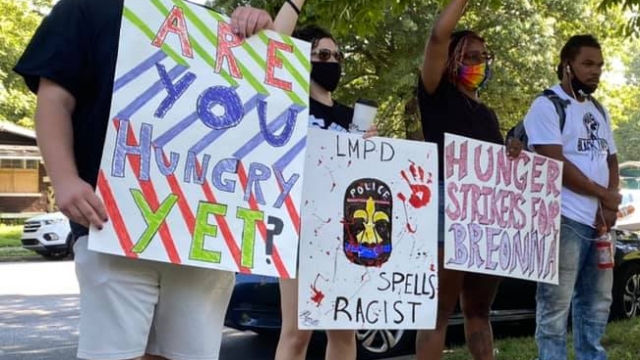 The group plans to go without food for over a week, calling for all officers involved in Taylor's death to be fired and their pensions stripped.

Amira Bryant is on her third day without food.

"At first I was like, will they even care that we're going to starve ourselves?" Bryant said. "[But] I'm feeling good, mind over matter, that type of deal."

Bryant and three others are livestreaming their hunger strike in Louisville. They're demanding the firing of the two officers involved in Breonna Taylor's death who are still on the force.

"Breonna Taylor could have been any of us," Bryant told Newsy.

Taylor was killed on March 13 when three Louisville Metro police officers served a no-knock warrant at her apartment in the middle of the night. Taylor's boyfriend, Kenneth Walker, was there and says he thought someone was breaking in. He fired his gun, hitting an officer in the leg. They fired back, striking Taylor at least eight times.

Walker says Taylor, an EMT, lay there dying for more than 20 minutes without any medical attention.

Officer Brett Hankinson, who shot into Taylor's apartment 10 times, was fired on June 29, but he's appealing his termination. The two other officers have been on administrative duty ever since.

"It doesn't make sense why they're dragging their feet with this," Bryant said. She and the other hunger strikers plan to go without food for more than a week or as long as they can.

Bryant says she's never fasted for more than six days, but the group has volunteers doing regular medical checks and activities planned to keep them going.

"It's something new to try," Bryant said. "The citizens of this city and world are willing to do whatever necessary to show you're mistreating us."

Both the FBI and the Kentucky Attorney General's office are investigating the shooting.

"They're going to look at all the facts," Craig Miller, a use-of-force expert, told Newsy. "You don't want something that's halfway done. The officers deserve a full investigation. The family of Ms. Taylor deserves a fair investigation."

Miller is the former Dallas deputy police chief and now advises departments on officer-involved shootings. He says the decision to fire or charge officers comes down to whether they were following their training.

But Miller notes, "That doesn't justify them using the shooting," especially because he says most officers are trained not to fire blindly. They're instead supposed to focus on a target first.

Investigators may have to answer more questions because the officers were not wearing body cameras. They may also be questioning why officers were at Taylor's apartment in the first place. The no-knock warrant named a different man who didn't live there.

"We want truth to be found immediately, but there are a lot of witnesses, a lot of canvassing," Miller said. "When a person loses their life, we want to make sure the appropriate charges are brought and that those charges can be justified."

For now, protesters want people to continue to "#SayHerName," a call to action still circulating on social media, often with a picture of 26-year old Breonna Taylor.

"We need to keep it out there that Black women are also being killed," Bryant said. "Now we need to come together to say all their names and get justice for everyone."

A Louisville Metro Council committee is now looking into the handling of these shootings and whether Louisville Mayor Greg Fischer has any responsibility.