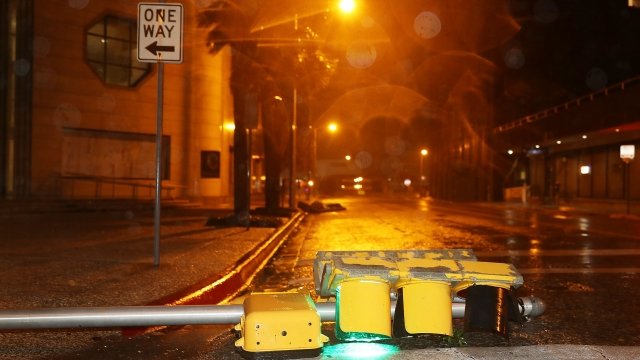 Forecasters say Harvey is the first major hurricane to hit the country in nearly 12 years.

Hurricane Harvey just hit southeast Texas, and the damage is only beginning.

Forecasters say Harvey is the first major hurricane to hit the U.S. in nearly 12 years. It made landfall Friday evening around Rockport, Texas. At that time it was a Category 4 hurricane with winds hitting speeds of more than 130 mph. It slowed down Saturday morning and was downgraded to a Category 1 storm.

Damage reported Saturday morning includes at least 10 people injured by collapsed roofs, thousands stranded on cruise ships and more than 200,000 hit with power outages. Those outages could last for weeks.

Despite the warnings and damage, some Texas residents and city officials — like Corpus Christi Mayor Joe McComb — were confident they were prepared for the worst.

"Game on. ... We're looking forward to having a very good, positive result of this storm. We'll get through this, and we'll be better for it because the community has pulled together," McComb said at a Friday news conference.

US Hurricane Trackers Are Short-Staffed, But They're Still Capable

Government agencies that watch and respond to hurricanes aren't as prepared for a busy season as they could be, but they still have plenty of tools.

Around 700 members of the State and National Guards were deployed around the coast. Rescue helicopters were standing by for search and rescue, and the American Red Cross was mobilized across the area. Over 554 ambulances were also readied.

Before Harvey made landfall, President Donald Trump signed a declaration to unleash "the full force of government help."

That means people affected by Harvey will have access to federal funding and assistance in the form of temporary housing, home repairs and loans.

Though Harvey has technically been downgraded, life-threatening floods are expected to hit Houston and Galveston.