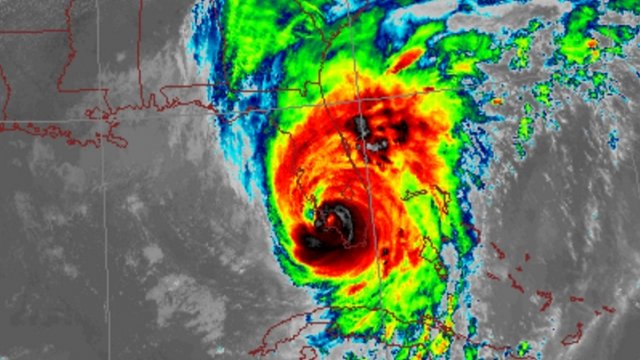 Ahead of the storm's arrival, about 6.5 million Florida residents were told to evacuate.

Hurricane Irma made landfall in the Florida Keys on Sunday morning as a Category 4 storm. By Sunday evening, her strength had been downgraded to a Category 2, but Irma still packed a big punch.

Winds gusts as high as 142 mph were reported on the Florida peninsula in Naples.

Waters receded at some of the beaches along the Florida coast as Irma moved north. But dangerous storm surges started to follow. Some areas were expecting water 10-15 feet above ground level.

Florida residents spent the past few days boarding up windows, charging electronics and stocking up on supplies.

"The good thing about hurricane preps is, like, the storm is bigger, but you have days and days in advance to either get out of Dodge or prepare the house and batten down the hatches," said Justin Sanak, a Largo, Florida, resident. "We’ve rebuilt fences every now and again, and we make sure the trees are trimmed, but we’ve never been through a hurricane of this size and strength."

Because of Hurricane Irma, the government is temporarily suspending a law prohibiting foreign ships from transporting goods between two U.S. ports.

More than half of the state was without power Monday morning — that's more than 5.8 million households. And much of Florida to the north of the storm's eye is under a tornado watch until midnight EDT.

The Florida Division of Emergency Management estimates 6.5 million Florida residents were told to evacuate ahead of Irma's arrival.

Even though the hurricane weakened Sunday, it's expected to remain powerful and dangerous as it moves up the Florida coast.

The eye of the storm will keep moving north Monday, and forecasters expect Irma to bring heavy rain and flooding to Florida and the southeast U.S. over the coming days.