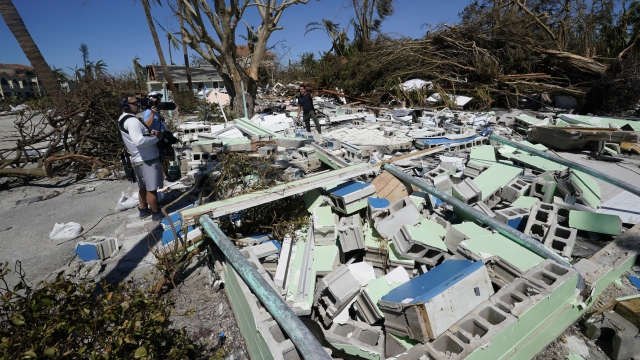 A popular tourist destination in Florida, Sanibel Island was heavily damaged by hurricane Ian, and it has given rescuers a hard time.

The trip to Sanibel Island is one of trepidation. It's mayor Holly Smith's first look at the damage since she evacuated before hurricane Ian's vicious onslaught of Florida's southwest coast.

"This was a complex storm because we could not see where it was going," said Smith. "It turned out to be the perfect storm of everything we've been afraid of for decades."

Sanibel is only reachable now by air or boat. Hurricane Ian washed large portions of its causeway bridge away.

"Our island is a jewel. People come from around the world to see our island," said Smith.

It's a tourist destination which also draws lovers of nature who have made it a home, like Eden Sherman.

"We moved for the nature, for the wildlife. It's stunning, absolutely stunning, the beaches, the sea shells. So peaceful. It will take years to get back to normal," said Sherman.

Hurricane warnings stretched from the Savannah River to Cape Fear, with flooding likely across the Carolinas and southwestern Virginia.

Sherman's home is surrounded by surging storm water. She waited it out nervously with her dogs, just like Michele and Whitey Herman, who got their six corgis to higher ground in their house.

"We took the highest ground we could, up on the kitchen counter with one of those pool floats. Had them all leashed and were planning if we had to float out the front door," said Whitey.

Newsy's John Mone was allowed aboard a ferry that was getting residents off the island, on the condition that he could not leave to look on dry land. But even the view from the boat showed signs of the devastation.

The island of just under 7,000 is a microcosm for southwest Florida's post-hurricane problems — no water, no power and no passable roads is making the job difficult for rescuers.

"The search and rescue is on as we speak. We go to everyone in need. We are going to get through this," said Sheriff Carmine Marceno of Lee County.

But for now the road forward is a slow moving exodus from a paradise lost.

On board the ferry with Mayor Smith, Newsy learned of two confirmed fatalities connected to the storm. That number may increase in the coming days.