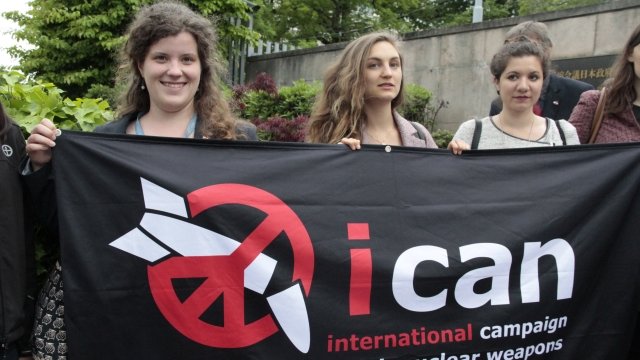 The International Campaign to Abolish Nuclear Weapons has worked for years to ban nuclear weapons around the world.

And on Friday, the organization — also known as ICAN — was rewarded, with the 2017 Nobel Peace Prize.

The Nobel committee praised ICAN for drawing attention to the "catastrophic humanitarian consequences" of using nuclear arms. It also applauded the group's "ground-breaking efforts" to ratify a treaty to ban those weapons.

ICAN promotes the United Nation's Treaty on the Prohibition of Nuclear Weapons, which 122 nations voted to adopt in July.

This Year's Nobel Prize In Literature Winner Is An Actual Novelist

Then last month, the treaty opened for signatures. It will go into effect 90 days after at least 50 nations ratify it. Three did Sept. 20.

But the agreement hasn't been signed by any nation that has nuclear arms — including the U.S., Russia and North Korea.

Still, the chair of the Norwegian Nobel Committee says this year's peace prize should spur nuclear powers to work toward disarmament.

ICAN said in a statement it was "a great honor" to receive the award, which also comes with a $1.1 million prize.