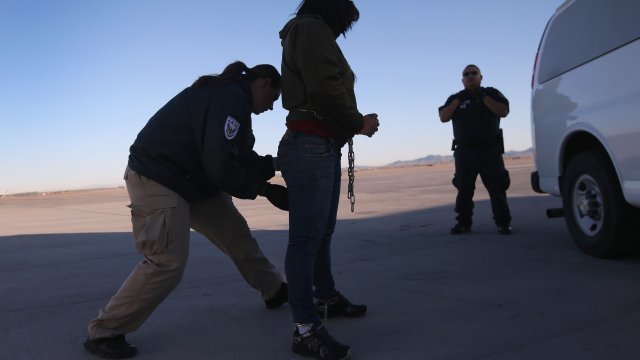 In the last fiscal year of Barack Obama's presidency, about 87 percent of undocumented immigrants arrested had criminal records. In the first half of fiscal year 2018 under Donald Trump's presidency, that number dropped to about 67 percent, according to The Wall Street Journal.

President Trump said he would prioritize criminals for deportation, but his definition of who is considered a criminal is pretty broad. It includes those who've committed any criminal offense, which could include minor infractions.

ICE agents also have more discretion in who they choose to target. A statement by ICE last year says: "Officers have been given clear direction to focus on threats to public safety and national security. ... However, when we encounter others who are in the country unlawfully, we will execute our sworn duty and enforce the law."

Immigrant arrests in general are up under the Trump administration. Last year, ICE announced a nearly 40 percent increase in arrests between January and April compared to the same time the year before.

Editor's note: This story has been updated with more information about how the Trump and Obama administrations' approaches to immigration differ. We've also removed a reference to President Trump's campaign promise to target immigrants who have criminal records — while he did make statements about deporting "criminal aliens," he also made broader statements about removing all undocumented immigrants.