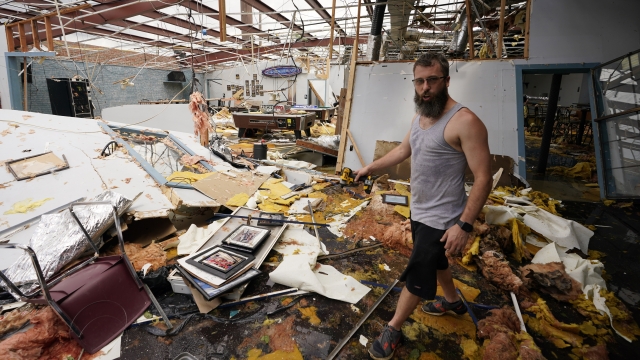 Residents are coming back to homes that are destroyed

Main Street of this southern Louisiana town resembles a canyon of rubble after Hurricane Ida.

Metal roofs peeled off buildings cover the sidewalks, and red bricks from a collapsed building mingle with big chunks of broken glass on a corner.

A man cleaning up damage throws a piece of roofing from atop Mardi Gras Hall, a bingo parlor, and it lands with a thud. A block away, broken limbs from giant oaks make it all but impossible to walk across a once shady square.

"It's like a bomb went off and just blew off houses' roofs, flattened trees, snapped them like matchsticks," said Michael Cobb, taking in the destruction Tuesday from his front porch a couple of blocks away.

Cobb's home, built from cypress 120 years ago and painted white with purple trim, survived the storm with only a water leak. Still, seeing Main Street in tatters filled him with sadness.

"It was such a pretty place," he said.

Situated on the Intracoastal Waterway where it crosses Bayou Terrebonne, Houma is a working-class town of 33,000 people who largely make their living off the nearby Gulf of Mexico. Many catch fish, shrimp and oysters. Others build and repair ships and barges or work support jobs for the oil industry.

Founded in 1832, Houma has weathered its share of hurricanes. Hurricane Katrina caused flooding and left the bayou littered with debris when it struck in 2005, precisely 16 years to the day before Ida made landfall.

The hurricane ripped away the corner of the flatiron-shaped Hancock Whitney Bank building. Across the street, which had been cleared for traffic Tuesday, three walls and the roof of a small bistro were collapsed in a heap.

Cobb's mother-in-law, Elizabeth Courteaux, has lived in the area her whole life and grew up speaking Cajun French. She said the storm was terrifying and the aftermath worrisome. Power could be out for a month, she said, and every tree near her home is down.

All through town Tuesday, power lines and utility poles hung precariously over streets littered with shingles and lumber ripped from fractured homes.

Power crews have started repairing the power grid around Houma, but no one is expecting a quick fix. People in these parts are used to surviving hurricanes, Cobb said, and Ida won't be any different.