Identifying Dead Migrants From Abandoned Truck Proving To Be Difficult 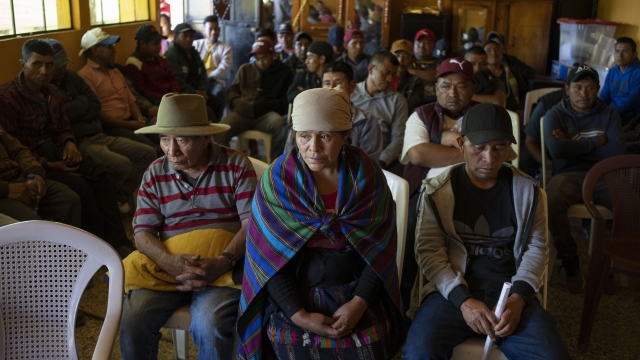 The migrant truck full of bodies had victims from at least four different countries, and authorities are having trouble identifying them.

Just days after 53 migrants from several counties died in a horrific smuggling case, identifying the dead is proving to be a challenge.

"Thirty requests have been received from families, from Mexican families, who are looking for Mexican nationals who have disappeared, and, it is believed, could coincide with some of the people in this group," Rubén Minutti, Mexico consul general in San Antonio, said.

Officials at Baptist Medical Center confirmed at least three of five patients found in the trailer have died. It is one of several hospitals caring for victims of the tragedy, when triple-digit temperatures in San Antonio turned an abandoned tractor-trailer packed with 67 migrants into a deadly oven on Monday.

So far, officials say they have 37 potential people identified, and countries of origin include Mexico, Honduras, Guatemala and El Salvador.

Identifying the victims' home country is only one part of the challenge; officials now have to track down families in small, and at times remote, villages.

On Wednesday, the governor of Texas promised tougher inspections at the border to help put an end to human smuggling.

Immigration activists who fought to lift Title 42 warned migrants would take greater risks if the policy stayed in place, but a federal judge blocked the Biden administration from lifting the Trump era public health policy, which expels migrants back to Mexico or their home country without screening their asylum claims.

"One week ago I was in the desert in Arizona," Carlos Eduardo Espina, immigration activist, said. "I found two human remains of people who died dehydrated trying to cross the border."

Espina says migrants are dying daily across the Southwest.

In a press conference, Gov. Greg Abbott once again blamed President Joe Biden for the deaths. He claims President Biden is not enforcing immigration laws or sufficiently funding border patrol to help secure the border and fully staff check points.

The president blamed what he called a multi-billion dollar criminal smuggling industry preying on migrants.

Activists say lifting the Trump border policy would put order into a chaotic situation and reduce smuggling. Meanwhile, the Texas governor believes the answer is a stronger border to prevent catastrophes like this one.

In April, Abbott stepped up truck inspections that slowed commercial traffic, angered truckers and even frustrated some officials in his own party.

Bexar County sheriff wrote a scathing letter about the governor to President Biden, saying Abbott was trying to shift the blame in a "campaign stunt," adding that the Texas governor’s efforts on the border are ineffective and only end up crowding jails.