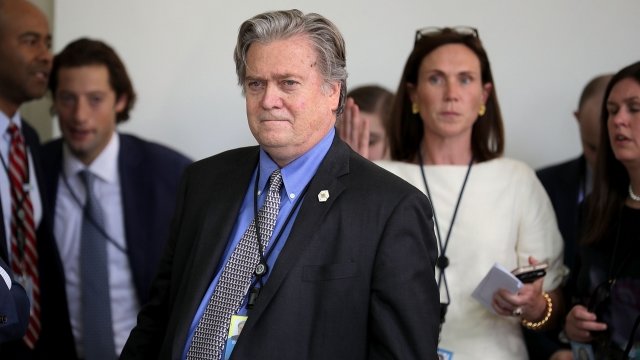 This is the first issue that could pit the former strategist against his old boss.

If you've wondered what topic might pit the president's administration against his former top strategist Steve Bannon, it could be the fight over the Deferred Action for Childhood Arrivals program.

After Bannon was fired last month, White House aides reportedly have been concerned how and when he could use his conservative website Breitbart against the White House. DACA will be the first big issue that could pit him against the federal government this fall.

The fight will likely be over the administration's plan to kick DACA over to Congress, giving it six months to come up with a legislative fix. If President Donald Trump ends up signing a new version of the program and breaking his campaign pledge to ax it entirely, Bannon's claws could come out.

Bannon also claims Trump's rhetoric and stance on illegal immigration is a big reason why he's in the Oval Office. And Bannon wants the president to keep those promises, including getting rid of DACA.

And there are signs the president might not nix it, outside of making good on a campaign promise. Sources tell Politico the president "doesn't like ending the program." And just last week, he said this:

"We love dreamers; we love everybody. ... The Dreamers are terrific."