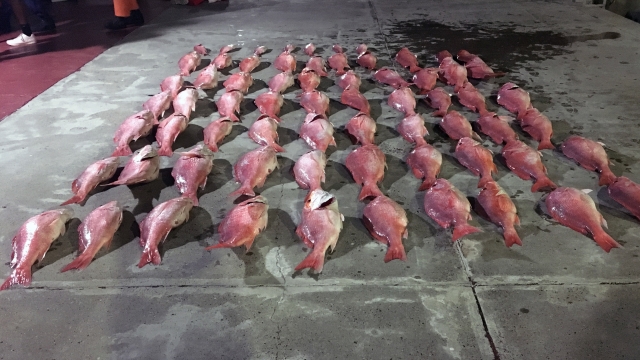 At Hooked on Seafood, red snapper fetches a premium price. For fishermen, the tasty fruit of the Gulf of Mexico is like striking gold.

"Red snapper is the hottest commodity in the U.S., here in this border," Hooked on Seafood owner Chris Johnson said.

But its high demand attracts schools of poachers from across the border.

"They're taking our money out of our waters and selling it right back to us and we're paying to do it every day," Johnson continued.

He's a fishmonger and fisherman on Texas' South Padre Island. He bellows a decades-long lament — illegal fishing operations from Mexico zip through the boundary waters poaching red snapper, shark and shrimp by the thousands.

"What's going on is, there's more and more snapper poachers coming off the Baghdad Beach and working in our area… they'd catch them all the way up to Corpus Christi," Johnson said.

The U.S. Coast Guard trawls the waters close the to the border line looking for the unwelcome visitors in "illegal fishing lanchas."

A lancha, which is Spanish for boat, is a 20-30 foot vessel known for being skinny, stealthy and wily.

"It's always good to know where your fish are coming from," South Padre Station U.S. Coast Guard Lt. Commander Dan Ippolito said. "You never want to be involved in any sort of illegal activity or anything like that. And that's another reason we're trying to stop that here."

Since October, Coast Guard patrols in South Texas have stopped 60 lanchas and reeled in 58 of them. In the last three years, they've seized hundreds.

"The boats that are used to run drugs have also been tied to other cartels," U.S. Coast Guard Lt. Collis Brown said. "So the likelihood that they would run drugs with the same boat they're using to fish with, is very likely too."

The seized vessels end up in the station's lancha graveyard — where if they're not claimed by Mexican authorities, they're destroyed.

"They're white in color and then they have a blue inside," Ippolito said. "That makes them very difficult to detect on the water because they blend in with the seas. If you're looking from above, it's hard to see blending in with the waves."

Mission systems operators use a plane-mounted camera to call in illegal fishing operations if they see them.

"As we fly out here, we detect them with the radar and then we use other systems like a camera to identify them," U.S. Coast Guard Chief Petty Officer Blair Doten said.

Looking for lanchas can be a game of frustration because when Coast Guard or state game wardens catch them, the fishermen are deported and often get right back in the water.

"We get repeat offenders, with multiple charges, previous charges. So it's not uncommon for us to see somebody who's done this six or seven times that's been caught six or seven times, so how many times did they do it without being caught" Dowdy continued.

In addition to stealing and depleting U.S. fishery stocks, lanchas use destructive, illegal gill nets and long line hooks, dragging everything in their path.

"We've seen sea turtles caught up in the net, lots of sharks, red snapper. We've found dolphins before. We actually rescued a dolphin just a couple weeks ago that was all tied up in a net," Ippolito said.

"It's just not fair to any of us and our industry is suffering the most," said Andrea Hance, with the Texas Shrimp Association.

"And obviously, on the commerce side, it affects our port down here in the port of Brownsville because they come in and they spend quite a bit of money on fuel and supplies and whatnot," Hance said.

It hurts, but the cost of doing nothing is too great, according to law enforcement and environmental advocates.

"You can't use those types of gear in the states because we know that that type of gear means overfishing to the point of population collapse," said Gary Glick, with Friends of Rio Grande Reef.

Often the same fish poached from Texas coastal waters and brought to Mexico get reimported and sold to U.S. markets. The federal government counts millions of pounds of snapper imported from Mexico every year. This rankles the likes of Chris Johnson.

"They don't care if they get caught because the worst that happens to them is they just get sent back over, they get another lancha and they do it all over again," Johnson said.

A glimmer of hope in all of this is the effort of a group called Friends of the Rio Grande Reef. In the last 6 years, they have raised money and built artificial reefs in this area, often with recycled concrete and decommissioned fishing boats.

The truly destructive part of poaching destroys natural reef habitat and deep sea hooks cull spawning-age adult red snapper, which are the prized ones because they're so big.

The artificial reefs function as a substitute and the fish that take refuge in them can flourish as long as you can keep poachers at bay.