Illegal Logging Is Rampant. Can IKEA Help Slow It Down? 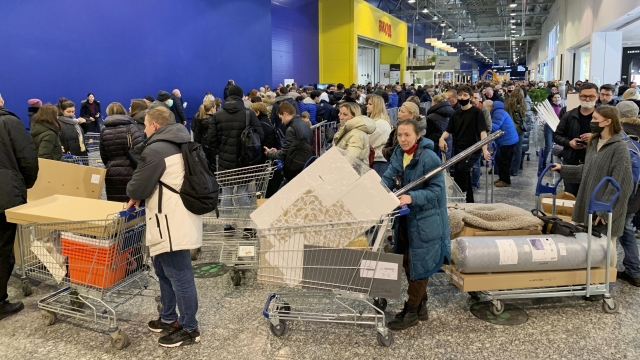 IKEA and other major furniture retailers get much of their wood from forests crucial for biodiversity, stripping land of trees faster than is healthy.

IKEA is one of the largest furniture retailers in the world and a leader in a booming global furniture market. The market hit an estimated value of over $490 billion last year.

The IKEA brand in particular is known for its pretty affordable products, but there are a lot of unseen costs that go into supplying cheap, mass-produced wooden furniture to major retailers — namely costs from how and where that wood gets harvested.

Eastern Europe and Russia offer a huge supply of high-quality and high-value woods like spruce and beech, and countries like Ukraine and Romania are home to huge old-growth forests. Old growth forests are well sought after but also some of the most important to protect. They’re particularly crucial for biodiversity, and old trees absorb carbon dioxide at higher rates than younger ones.

Now, estimates vary, but one environmental watchdog group determined more than half of IKEA’s wood supply comes from that region. To be clear, IKEA is far from the only major furniture supplier here, but it is arguably the biggest: The company alone is the largest individual consumer of wood in the world and doubled its consumption in the last decade.

IKEA has said before that “under no circumstances” would they accept wood that doesn’t meet their sustainability requirements. They've also taken action against problematic suppliers before.

To balance the growing global demand for wood with conservation of these crucial forests, the EU and national governments have established massive protected areas, and quotas limiting how much of a certain wood gets harvested.

These protections, by the way, apply to both public and private land. That’s important to note because IKEA itself is the largest private landowner in Romania. It owns about 83,000 acres — that’s almost 63,000 football fields-worth of land. It made this massive purchase back in 2015, buying from the previous owner, the Harvard Endowment Fund.

But despite the legal limits and forest management, the woods of Eastern Europe are vanishing much faster than they should be, and it’s only ramping up.

Part of this is due to deforestation, legally or otherwise. In 2018, for example, the Romanian government licensed about 18.5 million cubic meters of wood to be harvested, but instead, about 38.6 million was taken — more than twice the legal limit.

"It's also a breakdown of the sort of European laws meant to deal with this," said David Gehl, manager for traceability and technologies at the Environmental Investigation Agency. "Romania designated quite large amounts of its forest as protected areas. They never created the implementing regulations to actually implement those laws."

So, how is this happening right under regulators’ noses?

The problems often start early in the supply chain. For example, loggers can use false documentation to hide the amount or quality of the wood they’re harvesting. Sometimes it’s as simple as submitting unclear or misleading photos to the local government’s tracking system, obscuring how much wood is really being harvested. Then, the illegal wood is taken to a log depot, where it often gets mixed in with legal wood.

Enforcing rules on the ground becomes next to impossible thanks to what the press has dubbed the so-called “Timber Mafia,” which is a group well-ingrained in local communities.

"There's many excellent Romanian news reports and investigative reports about this, and many interviews, for example, with police officers who are just admitting very clearly on camera that they cannot touch these people," Gehl said.

Standing up to illegal loggers is dangerous work. Like other hotspots for illegal logging in the world, a number of forest managers, rangers, activists and journalists have been attacked or even killed throughout Eastern Europe and Russia. In Romania alone, at least six forest rangers have been killed in recent years, with 650 incidents of people being beaten, shot at or attacked in relation to illegal logging.

So how can furniture retailers ensure the wood they’re using was safely and legally sourced?

Furnishers often rely on something called the Forest Stewardship Certification, or FSC, to vet the sourcing for wood products. Third-party companies can be hired to conduct an audit along the supply chain — from the log depots to sawmills and more. They can award an FSC certification if the work there seems legit.

But critics have pointed out some central flaws to the audit process and warned FSC certifications may be giving a false sense of security.

"There's this kind of conflict of interest because IKEA is paying directly for an FSC certificate," said Tara Ganesh, head of investigations at Earthsight. "So this does not create much incentive for these auditors to independently look for problems because, in effect, these auditing companies within Russia are all competing for business from companies like IKEA."

"So we've talked to some certifying bodies that have said, you know, 'I was commissioned by this company. I spent three days in the forest. I gave them this list of 20 things that they would need to change to get their certification,'" Gehl said. "They said, 'Thank you very much,' and three days later, they got their certification from a different company."

There have been a number of separate investigations throughout Eastern Europe which found illegal timber processing at partners with IKEA, all of which were FSC-certified.

"It was a combination of looking at shipment records and undercover work calls to the suppliers concerned to try to get admissions from them about various practices and their links to IKEA," Ganesh said. "It was also in both cases in Ukraine and in Russia. There's actually a lot of information that's available publicly, which is fantastic. But also then begs the question that if we could find it, why did it take IKEA so long to find that, or FSC, for that matter?"

IKEA’s response was to defend its reliance on FSC certifications. The company insisted it was improving its system of “due diligence” checks. We reached out for a response on this. We didn’t hear back from IKEA, but the FSC drew our attention to other cases like in Ukraine, where they’re “working to prevent illegal logging” despite “the complexity of the situation.”

"I think IKEA is doing perhaps more than any other large wood processor in the world," Gehl said. "The problem is that the status quo, the bar of the status quo, is so low that even though they're doing better than that status quo, that's still very far from what is necessary to make sure that they're not getting illegal wood."

It’s hard to know where to start with a system like this: the danger for those working on the ground, the corruption along supply chains, the documented abuse of the FSC labels. What these problems really come down to is a lack of enforcement.