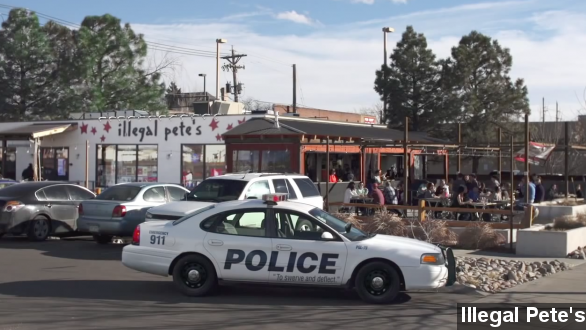 Illegal Pete's has been around since 1995 and plans to open a location in Fort Collins, Colorado — but some residents there object to the name.

The restaurant Illegal Pete's has been around since 1995, adding locations and growing as a business. But almost 20 years after it started, some people are taking issue with its name — with the use of the word "illegal."

Illegal Pete's is a burrito spot with locations around Colorado. Another is set to open in Fort Collins in three weeks. But about 30 people in Fort Collins gathered Wednesday to try to get the restaurant to change its name.

These locals argue their community's historical racial tensions will only be fueled by the restaurant's name. Owner Pete Turner met with the protesters Wednesday. He says he sees their point but that the word "illegal" is a reference to a book he once read, and "Pete," of course, comes from his own name.

But The Fort Collins Coloradoan quotes one protester who said: "I have been labeled with (the word illegal), it makes a huge difference to me." And a local immigration attorney said: "We'll never get to big issues, such as immigration reform, until we can solve these smaller issues of language."

It was just in August that the The Coloradoan covered what racism in 2014 looks like in the city, which is 90 percent white. The outlet's conclusion? It's more "subtle" these days — but the city has a much heavier history.

LEROY GOMEZ, HISPANIC ACTIVIST: "I could hear them say, 'Oh, there's a dirty Mexican.' That was my experience when I first came here."

But there are plenty of Coloradoans who have no problem with the name Illegal Pete's — the chain is a success. Here's a local news station's take.

"They said they feel there's a negative context for the word 'illegal.'"

"They obviously haven't had their burritos."

"They would want them there."

And this opinion piece in The Denver Post is to-the-point: "There's nothing wrong with the name Illegal Pete's. ... Protesters' energy would better [be] directed toward something that would make a real difference — like immigration reform."

Immigration is a hot-button issue in Colorado, just as it is nationwide. In August Colorado started issuing drivers' licenses to undocumented immigrants in a controversial move. Republican State Sen. Ted Harvey spoke out against the plan.

Ultimately, other than in Fort Collins, no one else seems to be accusing Turner of naming his restaurant offensively in the first place.

But can the word "illegal" get approved in Fort Collins? Turner says he's got much to consider after that Wednesday meeting.