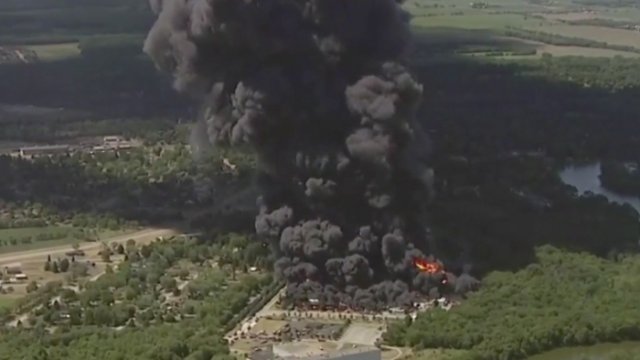 Officials ordered evacuations within one mile of the Chemtool plant in Rockton – just south of the Wisconsin border.

A chemical fire forced people from their homes in north central Illinois today and it could be burning for days.

Officials ordered evacuations within one mile of the Chemtool plant in Rockton – just south of the Wisconsin border.

The company that owns the plant is still looking into what caused Monday morning's explosion.

Fire officials say one firefighter had minor injuries, but is expected to be okay.

They say despite this plume of smoke, there's no danger to air quality. And they're letting the chemicals burn off on their own to avoid runoff into a nearby river.

Fire Chief Kirk Wilson, said: "The main thing is that we don't want an environmental nightmare to occur and the reason we can - that we would cause that - is by the use of water streams. So we stopped water operations at this point, we stopped suppression. We felt it was in our best interest to let this product burn off."