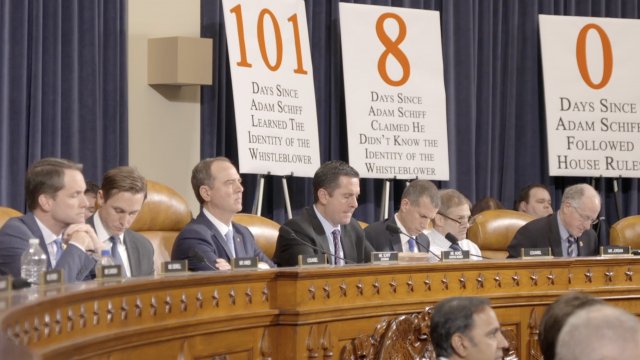 After a Tuesday evening vote, the impeachment inquiry is likely to shift to the House Judiciary Committee Wednesday morning.

A new month, a new phase of the impeachment inquiry. House Democrats are moving to shift their investigation from the Intelligence Committee to Judiciary. It’s a major shift because the Judiciary Committee is where impeachment articles would be written.

Per impeachment rules, the Intelligence Committee's report detailing its findings will be voted on Tuesday evening before being sent to the Judiciary Committee. Intel members get 24 hours to review the report before the vote. The rest of Congress won't see the report until after, something Judiciary Committee Ranking Member Doug Collins says is too close to the first scheduled hearing Wednesday morning..

Hearing witnesses are expected to be constitutional experts outlining "grounds for impeachment."

All of this as the White House says the administration won't participate in the hearing this week. In a five-page letter released Sunday night, White House lawyer Pat Cipollone responded to Judiciary Chairman Jerry Nadler's invitation to question witnesses, calling the inquiry "baseless" and in violation of "historical precedent, basic due process rights, and fundamental fairness." He and the president both criticized the chairman for scheduling the hearing while the president will be overseas for meetings in London.

Cipollone also blasted Nadler for what he calls a lack of information about future hearings, despite being asked to provide notice about whether the administration plans to participate in those unscheduled hearings. He did leave the door open to future participation, something even some Republicans on the committee support.

It's unclear how many hearings the Judiciary Committee is planning to hold, when they'll decide if articles of impeachment will be drafted, and when that vote will happen. Democratic sources familiar with the committee's thinking tell Newsy they want to finish it all by Christmas.