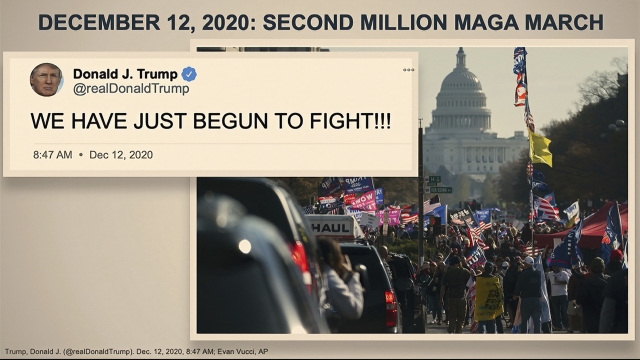 The House impeachment managers said former President Trump stoked his supporters for months by spreading lies about a stolen election.

For about five and a half hours, the managers presented the case for convicting Trump of incitement of insurrection.

"He told them to show up on Jan. 6 and march to the U.S. Capitol to stop the certification of the election results, and he told them to come here and fight like hell," said Rep. Joaquin Castro, one of the impeachment managers.

Their evidence went beyond Trump's Jan. 6 speech that directly preceded the Capitol riot. They brought up tweets, rallies and other public comments dating back to the spring of 2020, arguing the former president spent months inciting his supporters ahead of the insurrection.

"This clearly was not just one speech. It didn't just happen. It was part of a carefully planned monthslong effort with a very specific instruction: 'Show up on Jan. 6 and get your people to fight the certification,'" said Rep. Joe Neguse, an impeachment manager.

The managers argued that Trump knew some of his supporters were prone to violence. As evidence, they noted his responses to violence linked to the second Million MAGA March and when Trump supporters tried to run a Biden-Harris campaign bus off the road in Texas.

"For anyone who says Donald Trump didn't know the violence he was inciting, I ask you to consider his supporters tried to drive a bus off the highway in the middle of the day to intimidate his opponent's campaign workers. And his response was to tweet the video of the incident that had fight music, joke about it and call those individuals in that incident patriots," said Del. Stacey Plaskett, an impeachment manager.

One of the most dramatic parts of the day came when the managers provided a minute-by-minute walk-through of the insurrection. They played some D.C. police dispatch recordings where officers at the Capitol begged for reinforcements. They also showed security video from inside the Capitol that was not publicly shared before the Senate trial.

Lead manager Rep. Jamie Raskin also took a swipe at one of Trump's defense arguments — that his comments were protected by the First Amendment.

"This case is much worse than someone who falsely shouts 'fire' in a crowded theater. It's more like the town fire chief, who's paid to put out fires, sends a mob not to yell 'fire' in a crowded theater but to actually set the theater on fire. And who then, when the fire alarms go off and the calls start flooding into the fire department asking for help, does nothing but sit back, encourage the mob to continue its rampage and watch the fire spread on TV," said Raskin.

The Senate chamber devolved into some confusion as the evening wrapped. Republican Sen. Mike Lee accused House managers of misquoting in some of the evidence they used. The managers agreed to drop it from the evidence, for now.

The House managers will continue presenting their case on Thursday. The trial is set to resume at noon Eastern.