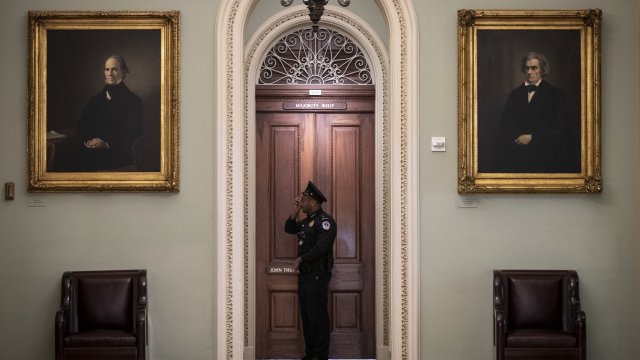 Security measures here on Capitol Hill will heavily intensify throughout the impeachment trial of President Donald Trump -- with strict limits being put in place that could hamper press access to lawmakers throughout the process.

Dozens of Capitol Police officers patrolled the halls of the Capitol as the impeachment trial kicked off locking down all access to the Senate wing of the building.

Access to the Senate side of the Capitol will be shut off to anyone without special permission to enter beginning 30 minutes before the trial begins each day. The restrictions remain in place for a half hour after the Senate adjourns.

And it's not just reporters -- Congressional staffers and tourists will face restrictions as well.

Journalists, who are typically able to walk and talk with Senators as they move about the Capitol, won't be able to leave designated press areas.

These restrictions were not in place during the impeachment trial for President Bill Clinton, and are already drawing harsh criticism from the press.

CNN Senior Congressional Correspondent Manu Raju tweeted: These unprecedented restrictions in the Capitol are preventing reporters from asking any questions to senators off the floor during the impeachment trial of a president —and need to be reversed by McConnell’s office and the @SenateSAA