Can Anything Big Get Done In Congress During Impeachment? 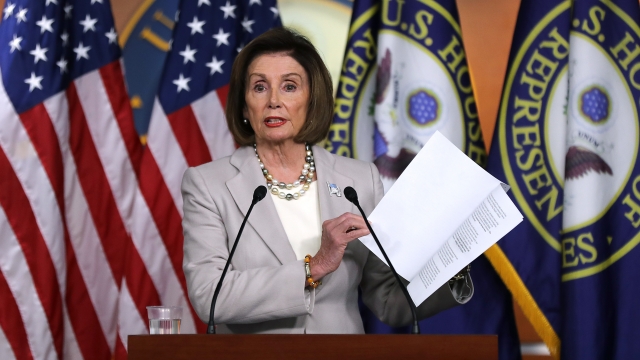 Congress is already very partisan, but the impeachment probe could make it even harder for lawmakers to pass major, bipartisan legislation.

The impeachment inquiry into President Donald Trump's dealings with Ukraine is overshadowing just about everything in Washington.

That includes work on significant legislation -- like a bill to lower the cost of prescription drugs and a new trade deal between the U.S., Canada and Mexico.

But lawmakers Newsy spoke with on both sides of the aisle say they are optimistic at least some major reforms can still get done in the highly partisan environment -- even if that has not historically been the case.

"They will still have plenty of floor time in the House to consider legislation and I think they'll have a desire to keep moving issues related to health care, housing, education, living wage jobs, carbon pollution, even while the committee is addressing the impeachment inquiry," said Oregon Democratic Sen. Jeff Merkley.

"I think the one thing we could do, and this depends on Nancy Pelosi, is trade treaty between the U.S., Mexico and Canada. That's done. It's completed. I think they've consulted with the Democrats. I mean, there's been an attempt to make it a bipartisan thing. That would be at least one achievement," Kentucky Republican Sen. Rand Paul said.

But you don't need to look back that far to see how difficult bipartisanship can be during impeachment.

President Bill Clinton's legislative agenda pretty much came to a halt once the House voted to launch impeachment proceedings against him in October 1998.

And that was during a time most experts agree Congress was less partisan. Before Congress launched its inquiry, Clinton worked with both parties to pass bills like the Children's Health Insurance Program, the Workforce Investment Act and the Balanced Budget Act.

This Congress didn't have many bipartisan achievements even before impeachment.

"I think there's been this gradual evolution in hyper-partisanship and it continues to manifest itself in the institutions. It's just very difficult at this point to engage with the other party," said Steven Billet, director of the legislative affairs graduate program at George Washington University.

Even lawmakers admit that building a broad coalition around any legislation is tough right now.

"There's not going to be a whole lot done or achieved simply because we disagree on things," said Paul. "The Democrat House wants things like Medicare-for-All. We think its a crazy notion to spend $60 trillion on that -- we're already short for the current medicare. We can't pay for what we have now. So I don't think we're going to find much agreement on things."

A recent Washington Post poll found a majority of Americans support the impeachment inquiry, but half say it's also distracting Congress from other important issues.

At the same time, Congressional approval, which is typically very low, has gone up since House Speaker Nancy Pelosi launched the probe.

"My theory about the role of Congress and the extent to which their approval has gone up, I believe relates to the fact that some of the people in congress are talking about the constitution and the fact that this is a constitutional process," Billet said.