Impeachment Trial Keeps Candidates In D.C. Ahead Of Iowa Caucuses 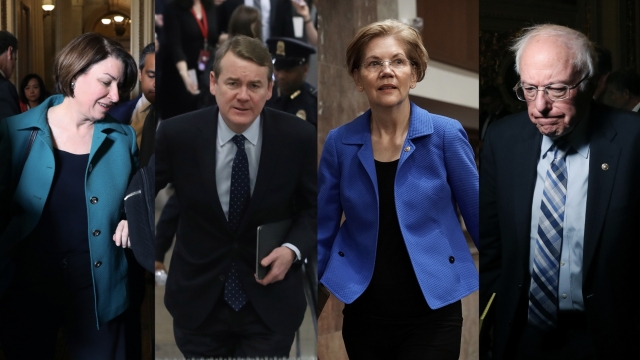 Sens. Michael Bennet, Amy Klobuchar, Bernie Sanders and Elizabeth Warren were in Washington D.C. Tuesday for the start of the Senate trial.

With the Iowa caucuses less than two weeks away, President Donald Trump's impeachment trial is putting a wrench in the campaign plans for four current senators.

"It's not great to be away from the campaign trail. ... It's especially not great in a place like Iowa, in which Iowans pride themselves on taking this job really seriously," said David Hawkings, editor-in-chief of The Fulcrum.

Sens. Michael Bennet, Amy Klobuchar, Bernie Sanders and Elizabeth Warren all spent at least some of the weekend campaigning in Iowa. But by Tuesday, all four needed to be back in Washington, D.C., to sit as jurors in the Senate trial.

"I swore an oath of duty as a United States senator, so I'm going to be there as part of the jury. What that means is we had to change our schedule around a lot," Sanders said over the weekend.

They're all relying on surrogates to keep up the momentum. Sanders had to cancel a Wednesday rally, but Rep. Alexandria Ocasio-Cortez is stepping in to headline events on Friday and Saturday in his place. Former candidate Julián Castro and his brother Rep. Joaquin Castro are participating in events for Warren. And Klobuchar is relying on her daughter, husband and more than a dozen state lawmakers to represent her.

Bennet's campaign is taking a slightly different approach and sending their top surrogates to events in New Hampshire. James Carville, a former adviser for President Clinton, will campaign there in the next few weeks.

Sanders and Warren have both scheduled weekend events in Iowa, but their appearances are presumably contingent on the Senate trial schedule. Only time will tell how this scheduling conflict impacts their campaigns.