In A First, Starbucks Workers Agree To Union In Buffalo, NY 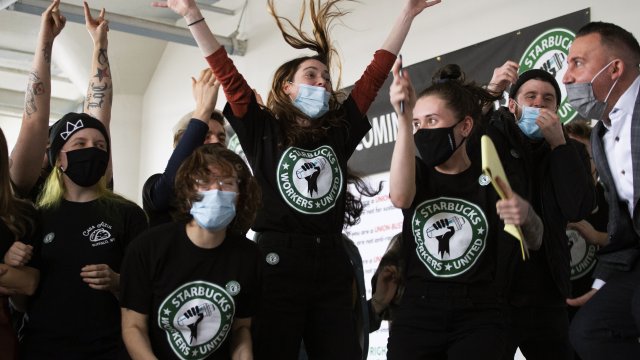 Starbucks workers at a store in Buffalo, New York, voted to unionize on Thursday, a first for the 50-year-old coffee retailer in the U.S.

The National Labor Relations Board said Thursday that workers voted 19-8 in favor of a union at the Elmwood Avenue location, one of three stores in Buffalo where elections were being held. A second store rejected the union in a vote of 12-8, but the union said it might challenge that result because it wasn't confident all of the eligible votes had been counted. The results of a third store could not be determined because both sides challenged seven separate votes.

If the labor board certifies the results and one or more of the stores unionizes, they would be the first Starbucks-owned stores in the U.S. to be represented by a union. The company has actively fought unionization at its stores for decades, saying its stores function best when it works directly with employees.

The election comes at a time of heightened labor unrest in the U.S. Striking cereal workers at Kellogg Co. rejected a new contract offer earlier this week. Thousands of workers were on strike at Deere & Co. earlier this fall. And the U.S. labor board recently approved a redo of a union vote at an Amazon warehouse in Alabama after finding the company pressured workers to vote against the union.

Labor shortages are giving workers a rare upper hand in wage negotiations. And Dan Graff, director of the Higgins Labor Program at the University of Notre Dame, said the pandemic gave many workers the time and space to rethink what they want from their jobs.

Starbucks workers watching the vote count on Thursday over Zoom on a big screen at a union office in Buffalo erupted into cheers and chants of “Elmwood, Elmwood, Elmwood!" when the results of that location were announced, jumping up and down and hugging each other.

“It has been an unbelievably long road to get to this point," said Michelle Eisen, an 11-year employee at the Elmwood store. "As of today, we have done it, in spite of everything the company has thrown at us. ”

Starbucks spokesman Reggie Borges said the company hasn't yet determined its next steps, but noted that there were close votes at two of the Buffalo stores.

Workers at all three stores began voting by mail last month on whether they wanted to be represented by Workers United, an affiliate of the Service Employees International Union.

The NLRB began counting ballots Thursday from union elections held at the stores. Around 111 Starbucks workers were eligible to vote; 78 ballots — including those that were challenged by the union and Starbucks — were counted Thursday.

“Yes” votes could accelerate unionization efforts at other U.S. Starbucks stores. Already, three more stores in Buffalo and a store in Mesa, Arizona, have filed petitions with the labor board for their own union elections. Those cases are pending.

Kent Wong, the director of the UCLA Labor Center, says that it’s a big deal for even one Starbucks location to vote for a union, calling it “a symbolic victory for the labor movement."

Wong noted that it could not only galvanize workers at other Starbucks locations but also at fast food chains.

“People are looking at what is happening in Buffalo,” Wong said.

But Matthew Dimick, an associate professor of law at the University of Buffalo, noted that Buffalo has a long tradition of labor organizing from its industrial past.

“Most Buffalonians probably see unions as a positive, and are therefore more willing to join and form unions than in other parts of the country,” Dimick said.

Rossann Williams, Starbucks executive vice president and president of North America, told The Associated Press that the Buffalo area also had acute problems coming out of the pandemic, including staff shortages and equipment problems.

“We didn’t have the right support here on the ground,” Williams said. The company has hired more than 200 people in Buffalo over the past few months and turned one store into a training center to bring workers up to speed more quickly, she added.

Union backers at the three Buffalo stores that held elections say Starbucks had chronic problems like understaffing and faulty equipment even before the pandemic. They want more input on pay and store operations.

Starbucks insists its more than 8,000 company-owned U.S. stores function best when it works directly with its employees, which it calls “partners.” Many employees in the Buffalo area work at more than one store depending on demand, Starbucks says, and it wants to have the flexibility to move them between stores.

Starbucks asked the labor board to hold one vote with all 20 of its Buffalo-area stores, but the board rejected that request, saying store-by-store votes were appropriate under labor law.

In a letter to Starbucks’ U.S. employees this week, Starbucks President and CEO Kevin Johnson reminded them of the company’s generous benefits, including paid parental and sick leave and free college tuition through Arizona State University. Late last month, the company also announced pay increases, saying all its U.S. workers will earn at least $15 — and up to $23 — per hour by next summer.

But backers of the union say Starbucks can do more.

“If Starbucks can find the money to pay their CEO nearly $15 million in compensation, I think maybe they can afford to pay their workers a decent wage with decent benefits,” said U.S. Sen. Bernie Sanders, a Vermont independent, in a recent Twitter post. Sanders held a virtual town hall with Buffalo Starbucks workers earlier this week.

Johnson earned $14.7 million in salary and stock awards in the company’s 2020 fiscal year.

If the votes do get certified and a store opts to unionize, Starbucks is legally obligated to begin the process of collective bargaining with Workers United, said Cathy Creighton, the director of Cornell University’s Industrial and Labor Relations Buffalo Co-Lab.

In some cases, companies have closed a location rather than deal with a union. But that's difficult for a retailer like Starbucks, since it would be illegal to close one store and then open another nearby, Creighton said.

Creighton called the union victory at the Elmwood store an “incredibly momentous occasion for working people in America.” She noted that it has been almost impossible to organize the food and beverage industry because the employers depend on a low wage workforce that turns over frequently.

“To get a group of people to stay together and weather the campaign that Starbucks waged against them is pretty extraordinary," she added.

Starbucks has shown a willingness to bargain outside the U.S. In Victoria, Canada, workers at a Starbucks store voted to unionize in August 2020. It took Starbucks and the United Steelworkers union nearly a year to reach a collective bargaining agreement, which was ratified by workers in July.

In the U.S., there are around 4,000 Starbucks outlets in grocery stores, airports, casinos and other locations that are unionized. But they are licensed by Starbucks and owned and operated by separate companies.