In Controversial Speech AG Barr Criticizes His Own DOJ Prosecutors 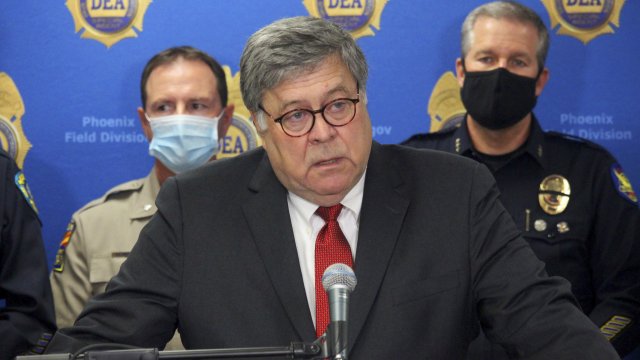 After comparing DOJ prosecutors to preschoolers, he went on to question the motives of Black Lives Matter and compare a COVID lockdown to slavery.

In a wide-ranging speech Wednesday night at a conservative college in Michigan, Attorney General William Barr questioned the motives of Black Lives Matter, compared federal prosecutors to preschoolers and mentioned a national lockdown from COVID-19 in the same breath as slavery.

BARR: "You know, putting a national lockdown, stay-at-home orders, is like house arrest. It’s — you know, other than slavery, which was a different kind of restraint, this is the greatest intrusion on civil liberties in American history."

CLYBURN: "I think that statement by Mr. Barr was the most ridiculous tone-deaf, God-awful thing I've ever heard. It is incredible that the chief law enforcement officer in this country would equate human bondage to expert advice."

BARR: “Who can quarrel with the proposition, Black lives matter? But they’re not interested in Black lives. They’re interested in props — a small number of Blacks who are killed by police during conflict with police, usually less than a dozen a year, who they can use as props to achieve a much broader political agenda."

According to a database of police shootings by The Washington Post, police have shot and killed at least 220 Black people every year since 2015 — the first year the data was compiled. That number does not include the deaths of people like Eric Garner and George Floyd who were suffocated to death by police.

And while Black people make up less than 13% of the US population, they are killed at twice the rate of their white counterparts.

This lashing out against protesters comes after Barr told federal prosecutors across the country to aggressively go after demonstrators who cause violence and consider charging them with sedition.

As part of Barr's prepared remarks, he went after his own prosecutors in the Justice Department, calling them "headhunters" who are "consumed with taking down their target" and then he said this.

BARR: "Name one successful organization where the lowest level employees’ decisions are deemed sacrosanct. There aren’t any. Letting the most junior members set the agenda might be a good philosophy for a Montessori preschool, but it’s no way to run a federal agency."

Barr has received lots of criticism for stepping in on multiple DOJ investigations in what critics called an effort to protect President Trump's allies.

Barr undercut the sentencing recommendation for President Trump's friend and adviser Roger Stone over the objection of four DOJ prosecutors handling the case.

Former high-ranking DOJ officials came to the defense of career prosecutors in reaction to Barr's statement.

Obama's AG Eric Holder called Barr 'dangerous' and his comments 'absurd' adding "When I was at DOJ - regardless of my ultimate authority - I saw the career staff as trusted colleagues, not pre-schoolers."

A former Trump appointee to the Justice Department, Jody Hunt, also spoke out...saying it's "not accurate to suggest that career officials are less experienced than political appointees."