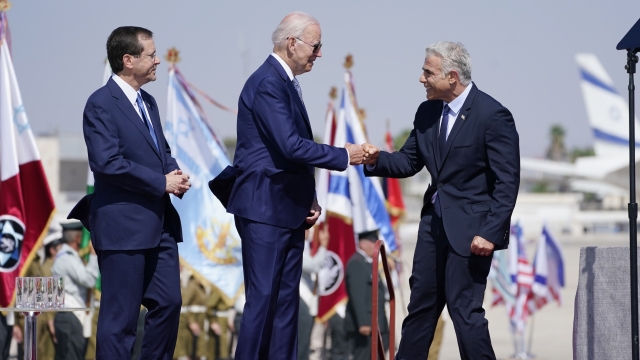 Israeli Prime Minister Yair Lapid and President Isaac Herzog made clear that Iran's nuclear program will be a central focus in their discussions.

Joe Biden opened his first visit to the Mideast as president on Wednesday by declaring a "bone deep" bond between the United States and Israel and pledging to strengthen economic connections between the two countries going forward.

He did not mention one of the larger goals of his visit: assuring uneasy Israeli and Saudi Arabian officials that he is committed to preventing Iran from becoming a nuclear power.

"We have a full agenda over the next few days, because the relationship between Israel and the United States covers every issue that matters to our mutual future," said President Biden, who was making his 10th visit to Israel. "But we are united in our shared values and our shared vision."

Israeli officials said Iran's quickly evolving nuclear program is at the top of their agenda for talks with the U.S. president. President Biden made reviving the Iran nuclear deal, brokered by Barack Obama in 2015 and abandoned by Donald Trump in 2018, a key priority as he entered office.

But indirect talks for the U.S. to reenter the deal have stalled as Iran has made rapid gains in developing its nuclear program. That's left the Biden administration increasingly pessimistic about resurrecting the deal, which placed significant restrictions on Iran's nuclear program in exchange for sanctions relief.

Israeli Prime Minister Yair Lapid and President Isaac Herzog made clear that Iran's nuclear program will be a central focus in their discussions with President Biden. And Herzog noted the "security challenges emanating directly from Iran and its proxies, threatening Israel and its neighbors and endangering our region."

"We will discuss the need to renew a strong global coalition that will stop the Iranian nuclear program," Lapid said

Because of concerns about a rise in COVID-19 cases, top White House officials said President Biden would try to limit physical contact during the trip. At the arrival ceremony, President Biden mostly skipped handshakes and offered Israeli officials fist bumps. But he made an exception by sharing a hearty handshake with opposition leader Benjamin Netanyahu. The president also put his hand on the shoulders of several Israeli dignitaries.

President Biden was hit with tough U.S. economic news as he arrived in Israel. Surging prices for gas, food and rent pushed U.S. inflation to a new four-decade high in June of 9.1%, the government reported. Rising consumer prices are among factors contributing to President Biden's low public approval at home.

The president received a briefing on the country's "Iron Dome" and new "Iron Beam" missile defense system and was visiting the Yad Vashem memorial to Holocaust victims later Wednesday. Besides meetings with Israeli and Palestinian officials, he's slated to receive Israel's Presidential Medal of Honor and visit with U.S. athletes taking part in the Maccabiah Games, which involve thousands of Jewish and Israeli athletes from around the globe.

President Biden added that a two state-solution is the best way to ensure a "future of equal measure of freedom, prosperity and democracy for Israelis and Palestinians alike." President Biden's national security adviser, Jake Sullivan, said the president would not offer any proposals during the trip aimed at restarting talks.

President Biden, in a Washington Post op-ed published Saturday, laced into Trump for quitting the nuclear deal that Britain, France, Germany, Russia, China and the European Union also signed onto. But he also suggested that he's still holding on to at least a sliver of hope that the Iranians will come back into compliance.

"My administration will continue to increase diplomatic and economic pressure until Iran is ready to return to compliance with the 2015 nuclear deal, as I remain prepared to do," he wrote.

Israeli officials, who briefed reporters before President Biden arrived in Israel, said the U.S. and Israel would issue a broad-ranging "Jerusalem Declaration" on Thursday that will take a tough stance on Iran's nuclear program.

The declaration commits both countries to use "all elements of their national power against the Iranian nuclear threat," according to an Israeli official who spoke on the condition of anonymity to preview the statement.

The official said the Israelis would stress to President Biden their view that Iran has calculated "time is on their side" and is loath to give any concessions. The Biden administration's last round of indirect negotiations with Iran in Doha, Qatar, late last month ended without success.

The White House has also been frustrated with repeated Iran-sponsored attacks on U.S. troops based in Iraq, though the administration says the frequency of such attacks has dropped precipitously over the last two years. Tehran also sponsored the rebel Houthis in a bloody war with the Saudis in Yemen. A U.N.-brokered cease-fire has been in place for more than four months, a fragile peace in a war that began in 2015.

Sullivan earlier this week said the administration believes Russia is turning to Iran to provide it with hundreds of unmanned aerial vehicles, including weapons-capable drones, for use in its ongoing war in Ukraine. Sullivan said Wednesday that Iranians showing a willingness to assist Russia is something that should be of great concern to the Israelis, Saudis and other Gulf allies that President Biden will be meeting with this week.

"We think that this is of interest, to put it mildly, to countries we will be visiting on this trip," Sullivan said.

The Saudis, like the Israelis, have been frustrated that the White House has not abandoned efforts to revive the nuclear deal with Tehran. President Biden heads to the Saudi port city of Jeddah on Friday to meet with King Salman and the Crown Prince Mohammed bin Salman, who is widely known by his initials MBS, and to attend a gathering of the Gulf Cooperation Council, where Iran's nuclear program is on the agenda.