In Pakistan, Fears Of Waterborne Diseases As Floods Recede 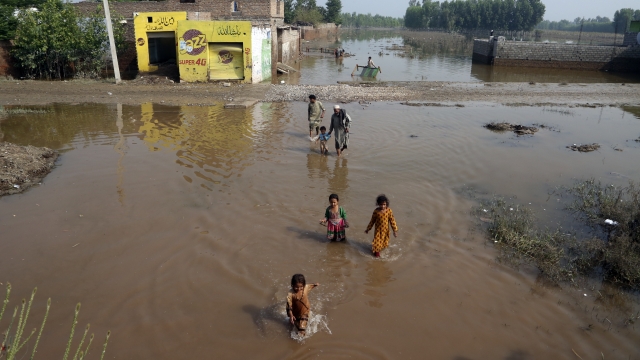 Doctors say they're treating people suffering from diarrhea, skin infections and other waterborne ailments in the country's flood-hit areas.

Officials in Pakistan raised concern Wednesday over the spread of waterborne diseases among thousands of flood victims as waters from powerful monsoon rains began to recede in many parts of the country.

Some doctors said initially they were seeing mostly patients traumatized by the flooding, but are now treating people suffering from diarrhea, skin infections and other waterborne ailments in the country's flood-hit areas.

The development has forced the government to deploy additional medical teams, dispatch medicine and provide clean drinking water to survivors, many of whom are living in tents and makeshift homes.

The warning came a day after record-breaking floods prompted the United Nations to formally issue an appeal for $160 million in emergency funding to the impoverished Islamic nation, where about a million homes have been damaged or destroyed.

Dr. Azra Fazal Pechuho, health minister in the country's worst-affected province of Sindh, said officials have set up 4,210 medical camps in the province's flood-hit areas to treat victims now suffering from skin and waterborne diseases, which are common during floods.

The World Health Organization began aiding Pakistani authorities in their efforts to treat people injured in the rains and flooding. The agency said in a statement it was working to increase surveillance for acute diarrhea, cholera and other communicable diseases to avoid their spreading further, and is also providing medicine and medical supplies to health facilities.

"WHO is working with health authorities to respond quickly and effectively on the ground," said Dr. Palitha Mahipala, the WHO representative in Pakistan. "Our key priorities now are to ensure rapid access to essential health services to the flood-affected population, (to) strengthen and expand disease surveillance, outbreak prevention and control, and ensure robust health cluster coordination."

Authorities said waterborne diseases among flood victims are now common across the country.

"Initially we received injured people, but now diarrhea is common," said Farhad Khan, a physician in charge of a medical camp set up in the northwestern town of Charsadda. It is one of the worst flood-hit districts in Khyber Pakhtunkhwa province bordering Afghanistan, where floods killed 257 people since mid-June.

An unprecedented monsoon season in the country has destroyed nearly 300,000 homes and knocked out power for millions of people.

Pakistani authorities backed by the military, rescuers and volunteers, have struggled to evacuate marooned people to safer places. On Wednesday, military helicopters continued evacuating flood victims and delivering food to remote regions, according to a statement released by the military. It said it has deployed at least 6,500 troops to assist in rescue and relief operations.

Prime Minister Shahbaz Sharif in a visit to the flood-hit Swat Valley promised the rehabilitation of every person displaced by the flood. In his televised comments, Shahbaz thanked U.N. Secretary-General Antonio Guterres for responding to Pakistan's request and issuing an appeal for $160 million in emergency funding to help flood victims. Guterres on Tuesday urged the world: "Let's stop sleepwalking toward the destruction of our planet by climate change."

Sharif's visit comes days after a raging Swat River destroyed the iconic New Honeymoon Hotel in the northwestern tourist resort of Kalam. There were no casualties as tourists and staff left the hotel following government evacuation instructions, and residents in Kalam said many streets there were still flooded.

Pakistan says it has received aid from some countries and others were dispatching aid, too. According to initial government estimates, the devastation caused $10 billion in damage to the economy.

"We fear the outbreak of the waterborne disease in flood-hit areas," he told The Associated Press. He said hundreds of people have contracted such illnesses in various parts of the province.

"In recent weeks floodwater badly affected hundreds of thousands of people. We don't want them to again suffer; this time due to non-availability of clean water and it can be avoided," Bangash said.

Although the rains stopped three days ago, large swaths of the country remain under water, and the main rivers, the Indus and the Swat, are still swollen. The National Disaster Management Authority has warned emergency services to be on maximum alert, saying flood waters over the next 24 hours could cause further damage.