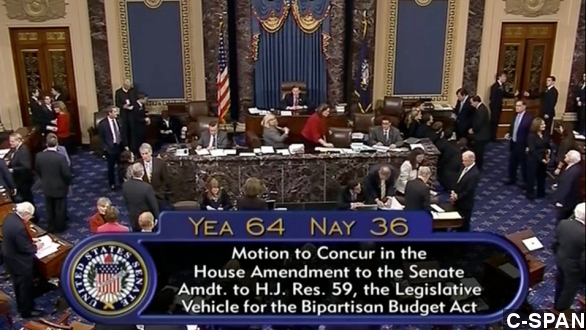 By a 64-36 vote, the Senate passed a bipartisan budget deal, sending the bill to the president's desk for his signature.

Compromise, bipartisan, legislative achievement. These are words we have not often used when discussing Congress this year, but all of them are relevant to Wednesday's news.

DANA BASH: "64-36, so it passed with some cushion, to say the least. There's certainly a lot of kumbaya over getting this budget done for the first time in years." (Via CNN)

Yes, not since 1986 has a divided government — with one chamber ruled by Democrats and the other by Republicans — passed a budget through Congress. (Via C-SPAN)

It now awaits a signature from President Obama, who has said he's on board. This will be the first proper U.S. budget since 2009. (Via The White House / Pete Souza)

The budget deal was drafted up by Democratic Sen. Patty Murray and conservative darling Paul Ryan, although it took some harsh words from leadership to get enough House Republicans on board. (Via RT)

BOEHNER: "Are you kidding me?" (Via MSNBC)

Passage through the Senate was no surprise, since every Democrat in the upper chamber supported the deal, although only nine Senate Republicans joined in the "yes" vote. That includes John McCain and Rob Portman. (Via The Washington Post)

This budget literally splits the difference between spending levels favored by Democrats and Republicans — setting it right in the middle. Nevertheless, most of the Senate GOP voted against the deal.

Marco Rubio, Ted Cruz and Rand Paul all voted no, as did 33 other Republicans — many of them facing primary challenges or in talks as potential GOP presidential candidates. (Via Tampa Bay Times, Politico)

This agreement will help avoid more government shutdowns over the next two years. It also rolls back a chunk of the so-called sequestration cuts.