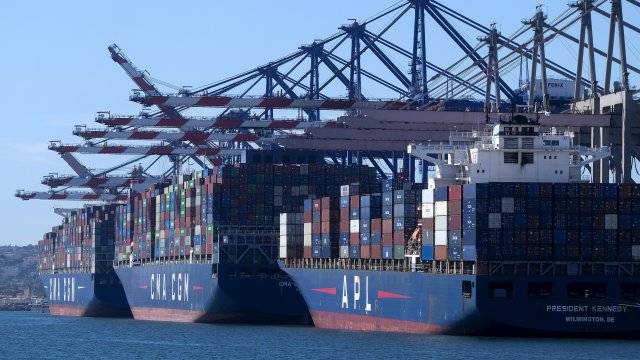 The economy went through a lot this year, as it continued to try to recover from the pandemic.

It hasn’t been an easy year for the economy.

It all started innocent enough, with the GameStop craze. In January, Reddit-inspired short sellers, or investors who bet a stock will fall, pushed the company’s stock price up 1,500%. This story was everywhere, because GameStop was considered a relic without a future, like Blockbuster or Radio Shack. It was also considered a collective pushback against big Wall Street firms, and inspired spirited debate over financial literacy.

Just a few weeks later, we see the supply chain crisis take hold. Scenes from the Suez Canal in March were a true tell-tale sign of what was to come this year – delays and resulting shortages, right into the holidays. These delays happened because shipping companies around the world cut their schedules as factories temporarily shut down due to COVID outbreaks.

Which brings us to: inflation. It jumped to 6.8% in November, the highest since 1982, fueled by that supply chain crisis. Eventually, Fed Chair Jerome Powell admitted using the term ‘transitory’ was a mistake. And like many other aspects of the pandemic, it’s become a political football on Capitol Hill, As did our next hurdle: The Great Resignation. Used to describe the trend of millions of Americans quitting their jobs, it spurred endless discussions on just how much the pandemic changed the nature of work. It also forced companies big and small to up their pay and benefits to attract workers, in ways that just a couple of years ago would have seemed extraordinary. And last but certainly not least: decentralized finance. 2021 was a big year for Bitcoin, which reached another record  high, and other digital currencies from Ethereum to Dogecoin. About $30 billion was invested in crypto this year alone, more than ever before.

Each economic event here has been influenced in some way by the pandemic, from the at-home entertainment that GameStop provided to new interest in digital currencies, free of interference from central banks. In the year ahead, the Omicron variant has analysts expecting more volatility, with lower unemployment but higher interest rates.