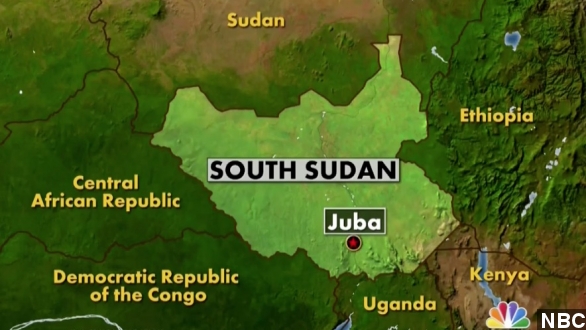 As the threat of civil war looms in South Sudan, the U.S. has dispatched Marines to nearby Djibouti, ready to move in and protect the U.S. embassy.

The U.S. has put Marines on alert near South Sudan, as the young African nation looks to be nearing a violent civil war.

The United Nations, along with the U.S. president, has asked that cooler heads prevail in the country. Many people have already been killed, as an ethnic minority led by the nation's former vice president has picked up arms against President Salva Kiir's government. He previously accused this former VP of trying to stage a coup. (Via Euronews, YouTube / South Sudan TV)

South Sudan split from Sudan in 2011 — that was a split both Presidents Obama and Bush had supported. The U.S. government believes it's evacuated all American civilians from South Sudan, but NBC's Andrea Mitchell notes the U.S. embassy might still be in danger. (Via Google Earth)

MITCHELL: "Today, the Pentagon did move 150 troops and 10 aircraft to the region from Spain. ... This is one of the lessons they learned about not having troops close enough during the Benghazi disaster."

Those U.S. troops and aircraft are in Djibouti — that's northeast of South Sudan. On Saturday, a U.S. mission to airlift civilians out was aborted after three helicopters were fired on. Four troops were injured, though all did survive.