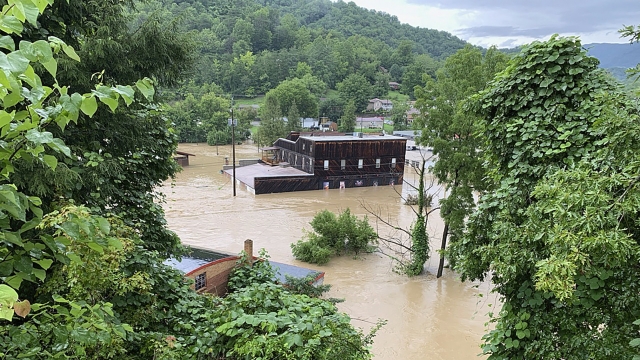 As search efforts continue, some Kentucky residents are also dealing with how the heat will affect their home recovery work.

In the days after the Kentucky floods, cleanup continues.

It's a race against water and mold in the walls, all of it in baking summer heat.

"It was getting up in the house," said Whitesburg resident JR Bates. "We had to get a kayak to go get my wife."

"Oh, it was terrifying," Whitesburg resident Pauline Bates said. "It scared my dog as much as it did me."

JR and Pauline Bates have had a home in Whitesburg for 24 years, but it was a race against time to get out of it alive last week.

"This has never flooded in all this time," Bates said. "We didn't have flood insurance. We never expected this."

They left behind all their belongings and say they basically lost everything.

The neighbors say the trouble began overnight Thursday when a rush of water inundated and overwhelmed the dam. It then quickly flooded in to the upper bottom section of Whitesburg, plunging the area into floodwaters.

The torrent swamped Tony Collins' Isom, Kentucky, house and the auto shop he ran next door.

"We tried to live in the double wide for two to three days, but the smell got so bad, and they told us it was not livable," Collins said.

Keith Smith, an emergency medical technician at Letcher County EMS, sounded the alarm bells when the runoff pooled around the fire station in Jeremiah.

"I can remember telling my wife, 'I've spent this many years helping people, getting to them and I can't get to them,'" Smith said. "I never thought I'd need to be got to. I'd say within 30 minutes the water went from my ankles to my knees."

Smith moved as much heavy equipment to higher ground as possible, but it was too late. He says at least eight emergency vehicles were flooded out.

"Our fire chief spent the night on top of [a] fire truck with water just under the windows, and I couldn't get to him," Smith said.

The swiftness of the elements and pace of the disaster haunt the paramedic.

"I helped a family out of their house the other day," Smith said. "Their father passed away not long ago, and they lost all his belongings. Things like that can be replaced, but now they don't have a place to sleep anymore."

The tragedy is putting everything in perspective for the people of Letcher County.

"Two things that I could think about is never take anything for granted, and hug your kids every day and tell them you love them," JR Bates said.

With the increasing temperatures as people aim to recover, the governor of Kentucky has ordered the opening of cooling centers for people without access to power and air conditioning. Access to clean drinking water is also affecting thousands of water system customers.