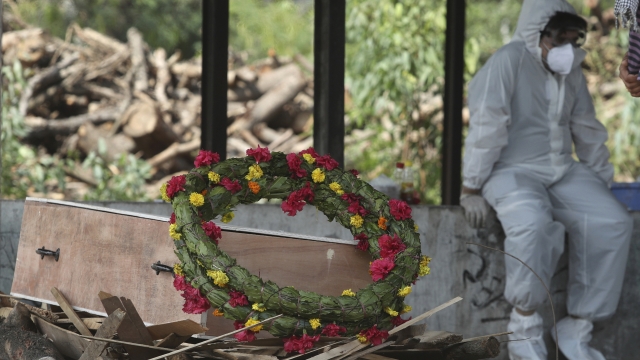 India is now opening up army hospitals to handle COVID patients and building makeshift crematoriums as cases and deaths continue to climb.

India's COVID cases continue to climb and there are more sick people than there are hospital beds as the country continues to struggle to keep up.

Now the army is opening up its hospitals in an effort to control the crisis. The U.S. is working to help people there, including some Americans.

The State Department says it's approved the voluntary departure of family members of American government employees. That doesn't force people to leave but it does give them the option to.

The State Department has issued a "do not travel" advisory for the country. That means millions of Indians in the U.S. with family back home are watching this crisis play out from afar.

One man said, "You feel very helpless and you're evaluating and watching everything by the minute. You know, you can call your parents, call your loved ones to see how they're doing, but there's only so much you can do right now."

Help from the U.S. is now arriving in India. This is the first of several relief shipments the U.S. will send there.

The U.S. also committed $100 million in aid which is being used to send 14 million N-95 masks, a million rapid tests and enough vaccine materials to produce 20 million doses.

India's government was criticized for downplaying the pandemic earlier this year when cases eased up.

Its ruling party says it doesn't want to place blame but wants to work toward helping its people.

"We were hit by a tsunami. As you know, when the tsunami hits you then you're very often not aware of that, " Narendra Taneja Spokesman for India's Ruling Party said. " We don't want to blame anybody. All we know is that yes, we are in power. We are responsible. This happened. Now our focus is how can we stabilize and how an we make sure our people are protected."

More than 208,000 people have died from the virus in India since the start of the pandemic.