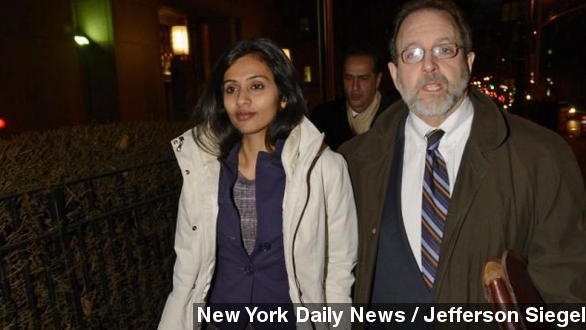 The arrest and strip-search of Indian diplomat Devyani Khobragade has sparked outrage in India, and strained the country's relationship with the U.S.

India is strengthening its stance against the U.S. following the arrest, and what it calls the mistreatment of, an Indian diplomat last week in New York City.

​​Devyani Khobragade was arrested last Tuesday. She was charged with paying her children's nanny less than minimum wage and visa fraud by lying on the nanny's visa about what she was going to pay her in order to get her into the U.S. (Via CBS)

The arrest of Khobragade has sparked diplomatic furor between India and the U.S., as India called the way Khobragade was arrested "humiliating."

New York City police reportedly arrested Khobragade near her daughter's Manhattan school. There are mixed reports of whether or not she was handcuffed or restrained, but she was strip-searched and placed in with the general population at a New York City jail. (Via Al Jazeera)

Authorities say the way they arrested Khobragade, including the strip-search, was all done in accordance to standard procedure — and that Khobragade was not granted any special status in this situation since the charges related to her personal life and not her consular functions.

The treatment of Khobragade has ignited massive protests across India. In New Delhi, Indian authorities removed the protective concrete barriers from around the U.S. consulate. They also stripped U.S. diplomats' ability to import food and alcohol to the embassy. (Via MSNBC)

In an attempt to quell the growing diplomatic row between the two nations, Secretary of State John Kerry expressed his regret to Indian officials over Khobragade's arrest, but India says that is not enough.

India's Parliamentary Affairs Minister Kamal Nath told reporters: "Just regretting and completing a formality is not acceptable. We are not happy. The way they have handled this case, their behaviour and attitude ... they will have to apologise ... They should admit that they have committed a mistake and only then will we be satisfied." (Via BBC)

And there has been backlash in India against Khobragade's nanny. CNN reports the nanny's family has now been brought to the U.S. (Via IBN Live)

"That's because there was retaliation against the family. Legal proceedings has started in India, but in addition the family was trying to get her to return back to the country where really she would have no legal rights."

In India, charges have been brought against the nanny in connection to blackmailing her employer, Khobragade.

According to The Times of India, this marks "[T]he third instance where maids working for diplomats at the Indian consulate ... in New York have complained against their employers." All charges in the first two cases involving diplomats were later dropped.

The charges against Khobragade carry a serious sentence, of five to 10 years if she is found guilty. Indian officials say Khobragade has now been taken to U.N. mission in New York after posting bail. There she does have full diplomatic immunity, and India has promised they will bring her home.