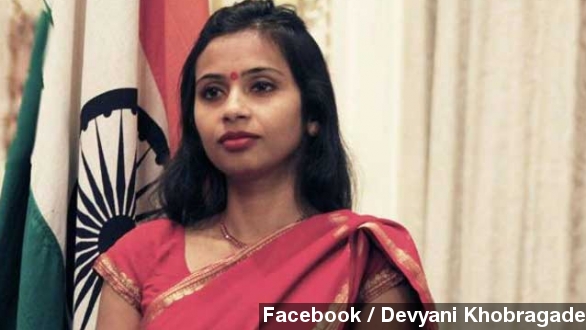 India's deputy consul general Devyani Khobragde was arrested on visa fraud charges in New York, but there are definitely two versions of the story.

​So — an Indian diplomat was arrested on visa fraud charges in New York. But there are definitely two versions of the story. Here’s what the U.S. Marshals Service says:

“Her name is Devyani Khobragade and she was arrested last Thursday, charged with visa fraud and underpaying her nanny." (Via CBS)

Now, U.S. officials say Khobragade was strip-searched and held in a cell with other women after her arrest, but they're calling that standard procedure. (Via Eye on South Asia)

And this is where it gets interesting. See — if you only watched American media coverage of the arrest — that’s about as much of the story as you’d likely hear. But Indian officials are furious. Check out how the country's Times Now characterizes the arrest:

“She was handcuffed and strip searched. ... Locked up with hardened criminals, she had to undergo a humiliating process.”

Now, the State Department is publicly downplaying all that, calling the arrest an "isolated episode" with no wider implications on diplomatic relations.

​​On the other hand — India's parliamentary affairs minister Kamal Nath called on the U.S. for a quote "unconditional apology." (Via Zee News)

And the country's National Security Adviser Shivshankar Menon called the arrest "despicable" and "barbaric." (Via MEAIndia)

Amid the outrage, the U.S. has pledged to review the details of Khobragade's arrest. By the way, you might be wondering about diplomatic immunity. According to the State Department, since the allegations against Khobragade aren't related to her consular role — she isn't entitled to immunity in this case.