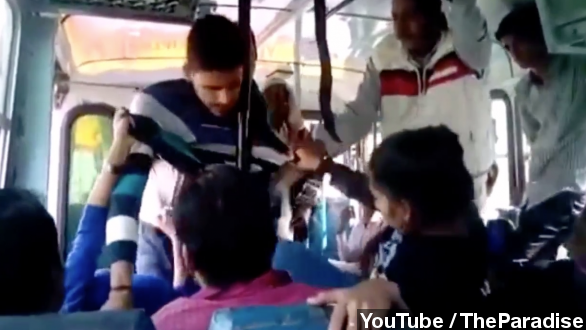 A video showing two sisters fighting off men who were allegedly assaulting them while on a moving bus reaffirms India's sexual violence problem.

Two years ago, the gang rape of an Indian student on a moving bus captured the world's attention. Now, a different bus attack has put the country's sexual violence problem back in the spotlight.

This video shows two sisters in India fighting off men who were allegedly sexually harassing them on a moving bus. (Video via YouTube / TheParadise)

One of the women told the BBC the other passengers on the bus looked the other way and "just sat back like it was a performance."

The video has gone viral in India and has prompted its own hashtag, with Twitter users praising the women for their bravery.

But as we know, their experience is far from unique. The 2012 gang rape and murder of a 23-year-old student on a bus in Delhi reminded the world why studies have referred to India as one of the worst places to be a woman.

Just this past weekend a Bollywood actress shooting a reality show was slapped in the face by a man who said her clothing was too provocative. (Video via Bollywood Life)

Another Indian actress, Freida Pinto, explained the constant street harassment this way to CNN: "So you continue living, thinking, 'I'm going to be fine.' And then one fine day, you're just marked for such brutality."

Although tough new rape laws and punishments were introduced after the 2012 bus attack, India still has a long way to go. According to the latest government figures, a woman is raped every 22 minutes.

Some good news has come out of the bus attack video. The three men involved were charged with assault and the sisters are receiving a cash award from the local government for their bravery.