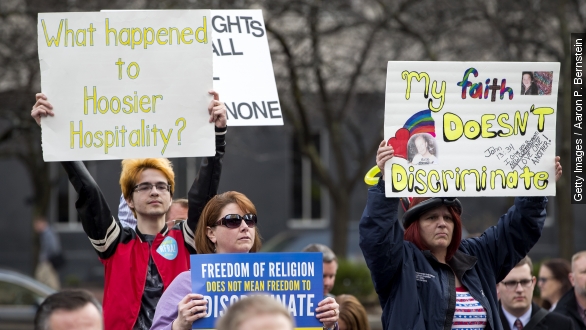 Indiana's governor and other state lawmakers continue to insist the "religious freedom" law is not discrimination and have promised to "clarify" it.

Indiana is officially getting every kind of attention you probably don't want for your home state, and the criticism only intensified overnight Monday.

The law, which opponents say could allow business owners to refuse services based on religious reasons, is not the first of its kind in the country. Nineteen other states and the federal government have similar laws, but this one put Indiana in the national spotlight nonetheless as many call the law discriminatory and say it targets gay people. (Video via WTHR)

The Indianapolis Star published an editorial Tuesday morning criticizing the law with the front page graphic "Fix This Now" and reading, in part, "Only bold action ... will be enough to reverse the damage." The Star's editor spoke to USA Today about the backlash from local business leaders.

"To a person, those businesses all said, 'We welcome doing business with anybody, and we'll continue to do that,'" Jeff Taylor said. "They just view this as legislation that was not necessary."

Time notes the damage has been significant, as the nation was already set to focus on Indianapolis as host for this weekend's Final Four NCAA basketball championships, artists have canceled shows, and — more humorous than damaging — an Indiana man has already successfully filed to establish the "First Church of Cannabis Inc."

One of those schools that played its way into the Final Four already came out against the law Monday. Duke University issued a statement saying, "We deplore any effort to legislate bias and discrimination."

"It is to set a standard, a high standard, of when government attempts to impact negatively or burden someone's religious liberty," Indiana state House Speaker Brian Bosma told NBC.

The mayor of Indianapolis has already called for the state to designate sexual orientation as a protected class like race or gender.