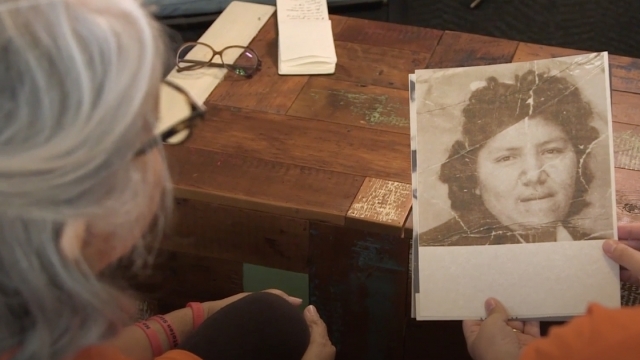 Brought Plenty says her experience at a South Dakota Indian boarding school led to mental trauma that she unknowingly passed down to her kids.

Brought Plenty remembers the day she was taken out of class and sent to boarding school, away from her grandparents' house where she lived.

"I was sitting up in the corner by one of the windows, and I saw two men come walking in the door," Plenty said. "They had the black suits on with a white shirt and black tie, walked in the school and he was talking to the teacher. Then she pointed at me, and they just came over and each one of them grabbed me by my arms and walked me out."

Plenty was just 6 years old at the time. She is now 70, and the experiences at the Pierre Indian Boarding school in South Dakota are ones that still stay with her.

At that time, Indigenous children were forcibly removed from their families by the federal government and placed in boarding schools to culturally strip them of their identities, languages and beliefs.

"She just grabbed my hair on one side, my braids, and just cut it off and threw it right at me and then went to the other side and cut it off," Plenty said. "Then they bent my head down and started running a black, fine comb through my hair."

One of the matrons cut her hair, made her bathe with soap that smelled like lye and told her to forget her name. Plenty was a ward of the state, just a number to the federal officials that ran the boarding school she attended until she was 13 years old.

She watched numerous girls get beaten — not just by other students, but by staff — as they attempted to run away from the harsh punishments and terrible conditions they endured.

"I got beat up by the kids, by the other girls," Plenty said. "A lot of it was entertainment through the matrons there. They literally would stand and watch you while it was happening."

Since Interior Secretary Deb Haaland made the reckoning and accounting of federally-run boarding schools a priority during her administration, hundreds of Indigenous people like Plenty have come forward to testify about their experiences during their time in the boarding schools.

All of them experienced things like Plenty did: both physical and mental abuse, including the pain of being separated from their families.

Plenty said she never saw the grandparents she was living with again.

"I was a ward of the state, so they could pretty much do with me what they wanted," Plenty said.

The Interior Department said that with further investigation the number of known student deaths could climb to the thousands.

Dr. Siobhan Wescott is a physician who works at the University of Nebraska's Native American Healing Center. She says there needs to be a way to "Indigenize mental health care" in order to effectively connect with the community.

"I think Western medicine — It's very good for a lot of things; mental health is not one of them," Dr. Wescott said. "The compartmentalized approach and really recognizing mental, spiritual, physical is all connected, that's not really the Western approach."

Tribal, spiritual practices that are from the survivor's tribal nations, traditional forms of healing-like ceremony, and the sense of community are what some psychologists who are part of the Society of Indian Psychologists say is important to healing.

Many boarding school survivors just started talking about the years of abuse they endured for the first time. Those experiences are passed down to children and other family members in the form of intergenerational trauma.

Now, Plenty's daughter Neilla is showing signs of that trauma.

"Because of the rigid way that I was taught to handle situations, just stern-faced all the time, I said, 'No. 1: I didn't strike you ever. I never hit you. I never did this to you. I did everything for you,'" Plenty said. "But yet, when you really look at what you went through, it's it is trauma. She was traumatized by what I had done as a mother, as a parent, and I understand that now. I understand her now, and it's very hurtful. I can honestly say with my older children, I never hugged, I never kissed them. I never told them I was proud of them."

Plenty and her daughter have just been able to speak about it without one of them becoming upset because of misunderstanding. They're working through the difficulties in their relationship through the non-profit they have called Brought Plenty Artworks. Neilla also helps her mom sell her art, and they raise awareness about boarding school survivors, too.

Through a GoFundMe that raised $25,000, they were able to buy a ground-penetrating radar machine to help tribal nations and organizations, like the Native American Boarding School Healing Coalition, find some of the missing children who never came home from boarding schools.

Although Plenty and her daughter are still working through their relationship, the efforts around their non-profit to help locate missing children and creating awareness around boarding schools has made them close.

Plenty says the experiences she had in boarding school are wounds that will never heal, but she hopes her daughter can heal and learn from her.