Indigenous Creators Are Leaving Their Mark On Pop Culture 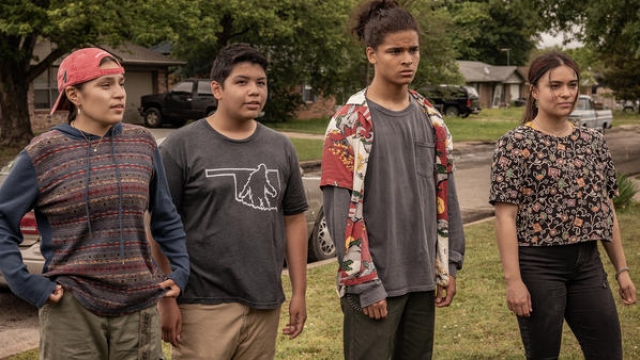 Shows like 'Reservation Dogs' are representing more Indigenous voices on and off the screen in the entertainment industry.

The TV landscape is changing, with viewing options moving far beyond cable.

One effect of the wide range of platforms is that there’s more room for a more diverse set of storytellers.  For Indigenous creators, it’s ushered in a golden age of Indigenous TV shows, and these aren’t stories that rely on stereotypes or otherwise relegate Indigenous people to history: A lot of these shows have more modern settings and lift Indigenous voices both on and off screen.

The acclaimed Hulu and FX comedy drama series "Reservation Dogs" centers around four young Indigenous people and is set on tribal land in rural Oklahoma. The show, with a second season premiering on Tuesday, features all-Indigenous writers and directors and a mostly Indigenous cast.

"Rutherford Falls," a sitcom with two seasons now out on Peacock, has a writer’s room where half the staff have Indigenous heritage, and the show prominently focuses on Indigenous characters and stories.

Indigenous storytelling has been shown to succeed before in other countries, often from filmmakers with government funding. That includes Australia, where films like 1993’s horror "Bedevil" were recognized at the Cannes Film Festival, New Zealand which produced the Academy Award-nominated film "Whale Rider" and Canada where the award-winning 2001 film "Atanarjuat: The Fast Runner" was later voted the greatest Canadian film of all time at the Toronto International Film Festival.

In the United States, there’s historically been less investment in Indigenous film, television and pop culture projects. But even without much state or federal help, Indigenous creators in the U.S. are getting new backing to help them tell their own stories.

Tribal governments have been working to become film hubs, including Cherokee Nation.

"We just announced our very first film using our virtual production sound stage," said Jennifer Loren, director of the Cherokee Nation Film Office. "They premiered this year at Tribeca. The film is called 'Land of Gold,' and it will be on HBO Max. I'm not sure exactly the timing on when it will be released on HBO Max, but hopefully this fall. There's one of our first projects to be approved called 'I Am a Man,' which tells the story of Chief Standing Bear."

Loren says the growth is happening because studios are investing in a more diverse range of stories in the aftermath of controversies like the #OscarsSoWhite trend that appeared in the leadup to the 2015 Academy Awards. Plus, Cherokee Nation is moving in the same direction, investing in film subsidies and building a soundstage. She says there’s still work left to be done.

The growth of tribal nations as filming sites is inspiring interest from Hollywood as well. "Killers of the Flower Moon," a film directed by Martin Scorsese coming out this fall, stars Leonardo DiCaprio and tells the story of an investigation into murders of members of the Osage Tribe. The film was shot primarily on Osage Nation land in collaboration with the tribe.

The Sundance Institute, which organizes the annual Sundance Film Festival, has an Indigenous Program that provides fellowships and labs for young Indigenous filmmakers.

"Being an Indigenous artist working in film or TV... it's something that can be a little bit lonely," said Adam Piron, director of the Sundance Institute Indigenous Program. "I think until you kind of know that there's a community of Indigenous people working out there and trying to get connected with them, you kind of don't necessarily know where to start, or you can feel like you're sort of working in a bit of a silo. So as much as giving a lot of that creative and financial support, we're also there to help people connect to the community of alumni that we have and some of the other people that are just working in the industry, too."

In April, Netflix announced that eight Indigenous producers will participate in a producers training program formed along with the racial and social justice organization IllumiNative.

Some of the writers, producers and cast members of FX/Hulu's "Reservation Dogs" reflected on being part of a show that’s breaking new ground for Indigenous representation in pop culture.

"Now, to see that we have Indigenous artists who are sort of elevated to this global stage, being able now to be in the position of folks like Sterlin Harjo, folks like Sierra Teller Ornelas, who can help like other Indigenous creatives and sort of take them by the braids and say, 'Come on let’s see what you’ve got,'" said Bobby Wilson, actor and co-producer of "Reservation Dogs." "We’re continuing to build, and the expectation falls on us to do what they’re doing and that is to lift each other."

"A lot of the writers are very, very passionate about their community and how they tell the stories of our communities, so being able to come into a room where a lot of us can be on that same vibe of being passionate about these stories is, you know, it’s been a great experience," said Chad Charlie, actor and writer of “Reservation Dogs."

"Our people are just so talented, and we have singers, we have dancers and we have all kinds of filmmakers, all kinds of talent that just needs to be shown more," said Paulina Alexis, "Reservation Dogs" actress. "I think it’s going off on a good start. I think Native people are about to have a moment here pretty soon."