Infants Hospitalized Due To Nationwide Shortage Of Baby Formula 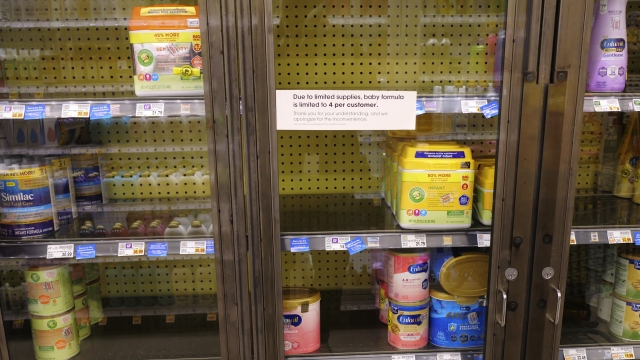 About 98% of infant formula consumed in the U.S. is produced domestically, only 2% is imported.

Officials say U.S. air force planes left today from Germany with more than 70,000 pounds of baby formula on board. This, as the situation grows dire.

Doctors in some states are now treating infants dehydrated and in need of IV fluids due to a lack of proper nutrition.

Parents across the country becoming more desperate to find formula, as it becomes nearly impossible to track down.

"At first I was like, ok, just keep trying, I'll go to another store. But by stores 12 and 13, I'm like ugh. You stare at the shelf like, this is getting old. I need to find something for my son to eat," said Stephanie Braun, a mom from Wisconsin.

"It's just discouraging when you go in there and it's not there and you just go in your head, what do you do?," said Kathryn Heller a mom from Florida.

A lack of formula and proper nutrition has sent at least four babies to a children's hospital in South Carolina. Children's hospitals in Memphis and Atlanta also report treating infants after their parents weren't able to find the formula they need.

"We've gotten supply from one of the alternate manufacturers of an amino acid-based formula, which is what these children needed," said Dr. Mark Corkins of Bonheur Children's Hospital in Memphis.

"We've seen kids get admitted to our emergency room in our hospital who are mixing things together that are really just not nutritionally complete or adequate for their child," said Dr. Crouse.

Dr. Crouse says the consequences could be fatal. Homemade formula can cause liver and kidney damage or create an imbalance in the baby's body that can cause their heart to stop. She says diluting formula to make it last longer can cause seizures, brain swelling, and even organ failure.

Operation Fly Formula is now underway after President Biden invoked the Defense Production Act to speed up the production of infant formula and use military aircraft to bring in baby formula to the United States.

About 98% of infant formula consumed in the U.S. is produced domestically, only 2% is imported. In light of the shortage, FDA officials are allowing more imports but only after the formula meets its' strict standards.

"I want to be clear. Under this process an infant formula would only be imported after the agency reviews the product and determines the product is safe and provides adequate nutrition. Safety is paramount," said FDA Commissioner Dr. Robert Califf.

Dr. Califf is telling lawmakers that Abbott's Michigan formula plant, closed since February due to contamination, could be up and running by next week. Abbott is one of four companies that produce an estimated 90% of U.S. formula. Once the plant re-opens, officials say it could take several weeks before supplies return to normal levels, especially in rural areas.

If your baby doesn't require specialty formula, doctors say you can use a different brand to substitute for now.

If you don't have enough formula, call the number 211, it's a free, confidential helpline that can connect you with either a food pantry or a program in your area that can help.

You can also ask your pediatrician for free samples.